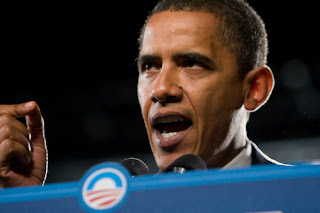 My disappointment with Obama has been growing since summer '09. I've been trying to figure out whether that's an unfair response on my part, or whether my discontent arises from significant failures on Obama's part.

It's not that Obama is a clear disaster. In fact, it's hard when you're president not to have some solid accomplishments, which I realized when I tried to come up with the ultimate failed president, and couldn't find one disastrous enough. (Governor of Arizona Evan Mecham is probably the gold standard of executive failure.)

So the problem isn't total absence of accomplishment, but a pattern of lapses in leadership. It's easy for steadfast supporters to argue against this perception as being subjective. However, these types of judgments are important when evaluating leadership, and voters do this naturally during an election cycle. Here are my complaints about Obama's leadership:

Many of these are a symptom of not being comfortable as president after his previous role as legislator. For example, Obama was largely absent from the work hammering out the health bill, even after things were just grinding in Congress. Despite his campaign promise that the work would be done in the open, he allowed the House Democrats to negotiate it in secret. The procedure used by Congress left them open to legitimate charges of favoritism to supporters (unions) and must-win senators, not aiming for a smaller sized bill, and ill-defined charges like ramming it down America's throat.

Now, Obama doesn't control either the House or Senate, but he could have let them know, in the way politically influential figures do, what he expected in terms of content and process. Instead, he let the Congressional Democrats do their thing and make stupid choices that cost them dearly in elections since 2008.

Such periods of inattention or inaction have occurred too often. Just to show what I mean, here's a timeline of significant milestones or achievements:


I picked out these accomplishments by how significant they seemed to me, so that fits the definition of subjective. However, I didn't know the dates of these events.

The timeline shows a massive slowdown in actions after June 2009, and only 5 significant events in 2010 prior to the mid-term elections. He picked up the ball again only since the debt ceiling agreement this year. That's over two years of relative inactivity, which is inexcusable in my opinion.

My two biggest complaints about Obama's leadership:
I don't know if Obama can recover from his errors or whether he even deserves to. Two years is a long time...

Resources: Best list of accomplishments (not too short, not the kitchen sink), timeline


Update December '12. I'm leaning towards blaming Pelosi for her part in a somewhat runaway Congress.
Posted by ModeratePoli at 4:09 PM

You'll get no argument from me on how disappointing Obama has been as a leader, particularly in standing up to Republicans who clearly prefer to keep the country in distress so they can blame that distress on Obama and defeat him in 2012.

But are you seriously trying to argue that he has failed by not "moderating the leftish tendencies of the party"? In what way have those tendencies been able to run freely? Healthcare reform? I don't think so. We should have gotten the public option. Financial reform? The banks and Wall Street got off while homeowners got screwed.

Please name ONE issue where the Progressives got their way in an unrestrained manner and highlight the effort by this president to see that that happened. And can you seriously equate any small example you might find of Progressive victory with presidential leadership against the unrestrained bonanza the Right has gotten under Bush II? Or in those states where they have taken over?

Obama's mistake was not fighting enough for Progressive causes that enjoyed strong popular support, instead looking to appease his adversaries. As a result, he's looked and acted weak and now he can't muster his forces or convince independents of his leadership. He tried to be an impartial arbitrator -- which is noble for a judge but a disaster as a chief executive.

YOU may have preferred he fight for more "moderate" causes such as debt reduction, and if he had shown leadership in those fights I might give him credit. But he was as milquetoast on those issues as all others.

If his real cause was to change the tone, he should look around and see that his weakness has just made it worse than ever. (Listen to the GOP candidates and leadership now.) They have no fear of him nor of the popularity of his policies because they know he can't close the sale. They can just lie, spin and wait for the next election.

Thanks Barack. You blew this country's best chance for progress in a generation.

Jumping over from JP's blog...

I don't really get the disappointed Democrats story.

You provide a long list of significant accomplishments, which is by no means exhaustive, and is still quite impressive.

The 111th congress was a very active, very progressive, very successful congress. The 112th is useless. But that's because liberals stayed home in '10.

What president, ever, accomplished more than Obama already has during his first term?

When will we ever see a president that accomplishes more than the one we have now?

@swain, thanks for posting. An answer will take a while, and I'm working this weekend. Please check back on Monday, because I do have a bunch to say.

Sure thing. I'll check back in.

@swain, I'm going to answer your comment point by point. Please don't take it as a barrage. I respect other viewpoints (see this post), but taking positions often means figuring out which is the strongest of several worthy positions.

"You provide a long list of significant accomplishments, which is by no means exhaustive, and is still quite impressive."

But did you notice, as I did, that there was quite a slowdown in 2010? In my opinion, Obama wasn't successful working with non-ideal situations, which means most situations. He could do things when the House and Senate were heavily Democratic, but not otherwise. Clinton was much better at threading that needle. But if you're only for the very progressive agenda, then what Clinton did wasn't a success.

"What president, ever, accomplished more than Obama already has during his first term?"

I was against Reagan, but he was certainly a powerhouse in changing the political dynamic. In terms of accomplishing more in his first term, I can't say for sure without doing research I'm not interested in doing. But from my memory (not an objectively reliable source), he did a lot in his first term, and left a huge legacy besides. We can't make a fair comparison to Obama until we know what his legacy will be.

"I don't really get the disappointed Democrats story."

What is your best guess about it? I tried to explain my disappointment--did my reasons not make sense, or do you just disagree?

There was no legislative slowdown in 2010. I mean, the US Senate always moves at an agonizingly slow pace and the GOP strategy was to drag their feet, gum up the works, try to make legislating impossible, and run out the clock. They were relatively successfully.

Given all that, a lot got done:

ACA, Financial Reg., DADT Repeal, Arms treaty, and the budget deal. There was even more big legislation that almost passed (Disclose and DREAM) and would have without the senate supermajority requirement - which the GOP pretty much invented during that congress and which has grossly distorted everything as the result.

Clinton was absolutely not better at “threading the needle”. Health care is the big, obvious example. Obama threaded the needle. Clinton impaled himself on it. What did Clinton accomplish? COBRA, SCHIP, and Family and Medical leave are all swell. But they are small potatoes compared to ACA. Welfare reform was significant but not exactly a liberal rallying cry.

Why are Democrats so disappointed? (And I agree that a great many of them are...)

John Chait has a great piece on the phenomenon (http://nymag.com/news/politics/liberal s-jonathan-chait-2011-11/) which suggests that liberals want magic ponies and they want them now. They are always quick to turn on their leaders.

But there’s another explanation...

When the economy is going well or improving rapidly everything thinks the president is a genius even if he doesn’t do much (Regan).

And when the economy and/or your personal situation is not so great, it’s easy to regard the President of the United States as a failure... even if he’s actually really, really good at his job. (Obama).

I think Clinton threaded the needle with welfare reform--he did important legislative work with the opposing party.

My top goals for the administration were to stop the economic tailspin, make healthcare more available, don't start stupid wasteful programs or wars, and don't break the bank.

Obama did two of those things, and then stopped on the agenda I wanted to see. I didn't expect magic, and I know that there are extenuating circumstances. Even considering that, I blame him for lack of good political positioning in most of 2010 and a lot of 2011.

So I ask again, do you comprehend my reasons?

I guess I don't quite understand your reasons.

Obama did pass sweeping health care reforms. We did pull out of the economic tailspin.

Did they start something that matches your definition of a "stupid wasteful programs or war"? What was it? Do you see more programs or wars coming? I don't.

As for breaking the bank... there's a problem, but I don't see that as something Obama's stopped working on. He pushed hard for a debt deal over the summer. He clearly wants a deal. There's just nobody to deal with. If the Bush tax cuts expire (and Obama has vowed to veto attempts to renew them in full) that'll be a total of $7 trillion in debt reduction.

No, he's not doing exactly what I want, but I don't expect that. He hasn't invented a new huge wasteful program, but something is keeping our spending up at stimulus levels ($3.5 trillion) two years after the stimulus.

As for engaging on the deficit issue, he was late to that, and it cost him a lot of credibility. The Simpson-Bowles plan was and is a good plan, and he treated it like a throw-away. His plans for the budget at the beginning of the year were terrible.

So he finally gets religion on the deficits this summer? That is so late. Even afterward, the jobs package he proposes is too big, and his focus is on stimulus, not the mounting debt.

I'm not saying I think the Republicans have the answer. The old ideologies don't work anymore (see this post). Obama is probably better than Romney, and certainly better than the Tea Party favorites. But I still think he misses the boat too often, so I'm disappointed. I'm not the fastest on the block, and he shouldn't be that much slower than I am.