On the Republican Menu: Just the leftovers 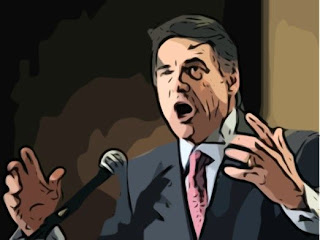 The low caliber of the Republican candidates is proving itself again. Today, I watched a compilation of clips from a Rick Perry speech last Friday where he seemed drunk.  Bachmann, Newt, Santorum ... nobody wants these egomaniacs with no realistic sense of themselves to be president. It would be too dangerous.

This should be a great year to run for president as a Republican. Then why is the field so bad? Because of the Tea Party. Romney is the only major candidate not pandering to them. I suspect that other potential candidates couldn't stomach the political atmosphere. They weren't prepared to spew hate the way the Tea Party demands, and they didn't want to be the Tea Party's target either.

Does the Tea Party run the Republicans now, or is it just the only part with a voice that still works? I think it's time for Republicans to push back. Some sane Republican should talk some sense--talk respectfully about Obama's successes and failures, talk about how to compromise on deficit reduction and tax reform. Instead of having 8 flavors of Not-Romney, we should have at least 4 flavors of Not-Tea-Party. That would be a Republican race that I and most of the country would cheer on. As it is, we're laughing, or just shaking our heads.

P.S. I know these ideas aren't news. However, today it's all I can think about, so I'm exorcising it onto my blog. That's part of what my blog is for.

Extras: Flashback 2008, no more hacks, this devastating bit from Jon Stewart that I've cited elsewhere in the blog and is completely relevant here too.
Posted by ModeratePoli at 5:21 PM

What you've forgotten, MP, is that no Republican would over even hint that Obama has had any success at all. That would leave them with no excuse for having fought every effort of a president given an electoral mandate. So the political calculation is to lay all blame all the time on Obama and hope that things remain awful enough in the economy that the voters won't care that the GOP candidate is a pip.

Romney is probably the least pippy of the pips, but he's shown he can still be plenty pippy. He's also completely on board with the "blame Obama" meme, even when Obama used Romney's playbook as in the weak-ass healthcare "reform". Any fig leaf -- "it should be left to the states" -- let Romney scoot by having to give Obama credit for anything using the GOP double-standard as they must to find themselves blameless for the economy they created under Bush II, while laying the blame on Obama.

So you expect an "honest duscssion of Obama's successes and failures"? How about first and honest discussion of Bush's and their huge failures and middling -- in any -- successes? Frankly, they don't deserve an audience for anything they have to say since they came out of 2008 not with any soul-searching, but with a cutthroat political strategy only. Screw 'em. And don't let them control the debate again.

@Anon 11:33
Do I expect some sane Republican to start being honest about Obama? No, I don't because no Republican is doing it. I believe in bears because I see bears. I don't believe in yetis because I've never seen one or seen good evidence of one.

But I can still ask the Republicans to return to sanity. And I'm hoping to see more signs of sanity when the primaries start. If not, the political landscape will stay disorganized for a few more years when we can ill afford it.

>Romney is the only major candidate not pandering to them.

"I believe in what a lot of the Tea Party believes in.... [I]f the Tea Party is for keeping government small and spending down and helping us create jobs, then I'm for the Tea Party." -- Romney at one of the debates

You're well known on blog comment pages, and I welcome you here, but I don't agree with your opinion on this. It takes much more than that quote to make someone a panderer, unless you have a very low bar before you use that term.

Romney is bypassing a lot of the Tea Party emphasis and rhetoric. Romney's main issues are jobs, fiscal responsibility and foreign policy. Not surprisingly, he treads somewhat lightly on healthcare. He certainly hasn't backpedaled to say he was wrong, wrong, wrong on his Mass. health reform.

Compare this other candidates where "faith and family," immigration, and massive expansion of energy production are among the highlighted issues.

There's also the rhetoric. Romney isn't picking up the "dependency" and "plantation" trash talk that other candidates use.

For these reasons, I think I'm right to say Romney doesn't pander to the Tea Party.

>Romney is bypassing a lot of the Tea Party emphasis and rhetoric.

Sorry, I think this is splitting hairs. Romney during this campaign has not made a single policy proposal that would place him outside the TP. He's embraced the entirety of their hard-right economic agenda, and he's actually run to Perry's right on immigration. He would be popular with the TP if they didn't know about his moderate past and judged him solely on his rhetoric this year.

>He certainly hasn't backpedaled to say he was wrong, wrong, wrong on his Mass. health reform.

Disowning his signature achievement while in office would be monumentally stupid, and he knows it. But he has taken pains to downplay its significance, with his rhetoric about how it was a very particular solution for one state (contradicting earlier statements of his), and he has tried to emphasize its conservative, market-based features (while misleadingly implying that Obamacare lacks those features). This is probably the only strategy Romney could have taken to remain a viable candidate.

>Romney isn't picking up the "dependency" and "plantation" trash talk that other candidates use.

He said "We are only inches away from ceasing to be a free market economy." He compared the U.S. government to the British under King George III. I would classify both those statements as "trash talk." Not that trash talk is necessary to be considered part of the TP--has Marco Rubio done any trash talk?

I do think that Romney has carefully structured his campaign to appear not quite as extreme, not quite as crazy, as the TP candidates. And unlike the other candidates, he seems to be genuinely working on a message that will appeal to general-election voters, and not just to primary voters. So I agree that there's a difference of emphasis between his campaign and those of Perry, Bachmann, and Cain. But to suggest he hasn't been pandering to the TP is simply blind.

@Kylopod, I still disagree, but this may be a semantic difference.

You comment how he "has carefully structured his campaign to appear not quite as extreme, not quite as crazy, as the TP candidates." I see it too, and that is part of the reason I say he is not pandering. The TP has gravitated to the candidates that talk in extremes, and Romney hasn't.

It seems to me that Romney's policies and language fulfill what the Republican party in general seems to require now (Obama hasn't done anything right, repeal ACA). It's fair to call this pandering to the TP, but I see it more as the new standard for national Republican politicians.

Romney doesn't cleave to everything the TP whats to hear and cheer for. His main platform is not all hard-right. For example, he wants to shrink the federal government to 20% of GDP, not the 18% figure that is common among TP. This is an explicit number and a departure from TP standard.

So I have a somewhat different point at which I would use the word pander. I would also say that Ron Paul and Huntsman don't pander either. Maybe you disagree with that too.

>The TP has gravitated to the candidates that talk in extremes, and Romney hasn't.

Romney has talked in extremes--he just tries to come off as slightly less extreme than the others. Take his statement about the end of the free-market economy. A couple of decades ago, that's the sort of thing only a Gingrich would have said. Today, when you have candidates talking about Democrat plantations and secession and Sharia takeover, Romney's remark is barely given a second glance and he retains his "moderate" status. It's all an exercise in forced perspective. It's like the old Onion article about the moderate terrorist who criticizes the 9/11 attackers for having destroyed both towers.

Furthermore, the entire reason I believe Romney is persona non grata in the TP movement is his past, not anything he's said during his current presidential run. If you ignored his moderate history, didn't know anything about Romneycare, and just listened to the things he's said this year, you wouldn't have a clue he's in any way separate from the TP. The TP wouldn't have a clue either, and they'd consider him one of them. He'd still be slightly less extreme than the other candidates, but that wouldn't necessarily make him an outsider. As I alluded to before, Marco Rubio has become a TP star while avoiding the kind of inflammatory and extreme rhetoric the movement has become associated with.

>It's fair to call this pandering to the TP, but I see it more as the new standard for national Republican politicians.

But that's just the point--the new standard comes from the fact that the GOP is now in the grips of the TP, and so all the candidates are required to pander to the TP as a rite of passage.

>I would also say that Ron Paul and Huntsman don't pander either.

I agree that they don't pander to the TP, but they aren't viable candidates, and the fact that they don't pander is part of the reason. Pandering to the TP is absolutely necessary to remain viable in today's GOP race. That's what Romney does--nothing more, nothing less. He does just enough pandering to remain viable as a primary contender, while trying to avoid the excesses that would damage his brand in the general election. It's still pandering, and the fact that he has no choice if he wants to remain viable doesn't change that.

@Kylopod, This is a much delayed response, but I've come around to your point. Yes, Romney is pandering to the Tea Party, but I feel that it's not to the degree of the other candidates who are angling for TP support.