It's time for me to accept that Romney may well be Republican nominee, despite the appearance that half the Repub base can't stand him. Since I live in Massachusetts, I've experienced Romney as a governor but I can barely remember it. That indicates that he wasn't a great governor or an awful one. That's the sum of my firsthand experience. For any other questions, I have to research just like anyone else. This comment from an Atlantic blog seconded my impression of him and prompted my flurry of Romney research:


"He's seeped himself in the republican orthodoxy with a wink wink and nod and a smile at the camera.  I think he can largely free himself from that come the general election." --Atlantic post

My impression of Romney as a campaigner: polished delivery, strong on the details, personable, moderate. I don't remember many policy proposals, but the entire field has been rather lean on policy (except 9-9-9), so that's par for the course. I had to look at the goods, so I skimmed Romney's 87-page economic plan.

The good news is that the plan is not a typical Republican conservative supply-side fairy tale. Of course there's Obama-bashing on every other page, but there's some promising stuff too. What I liked:
What I didn't like:
Gaping holes in the plan:

So, my overall impression is that the plan isn't extreme considering it came from a Republican: no major tax cuts, a reasonable goal on regulation. But it fails in two essential ways:
This plan is meant to get Romney elected, and only then will we find out if he'll grapple with tough issues. I'm sure no one is surprised that Romney is playing it safe. 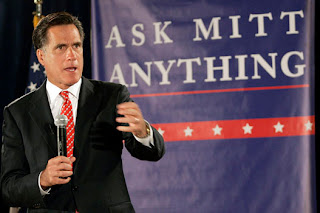 ...but don't expect a straight answer.


Should I review Michele Bachmann's plan now? ... No, I'll stick to real candidates.

Update 12/13/11. Romney announced his plans for Medicare reform, and they look a lot like Ryan's plan to voucherize the program.The big advantage of vouchers is that the federal government can decide how much to spend year-to-year. A big disadvantage is that it puts cost-containment onto insurance companies. To be fair, cost-containment is the boogey man in all Medicare plans. ...Oh, it's not a voucher, it's premium support. Don't ask me to explain the non-existent difference between the two.

Posted by ModeratePoli at 1:03 PM