The Growing Importance of the Super Committee 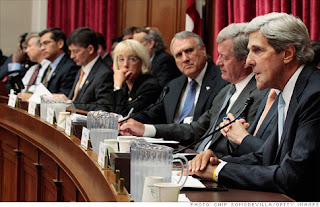 The shutdown looming last week was just barely averted. The rebellious Tea Party continues to demand budget concessions whenever they can take a hostage. But the Dems are not folding anymore. Why? Maybe because of the super committee.

The super committee is charged with negotiating deficit reduction between two camps that are pretty far apart. Too many in Congress have pledged to non-negotiable positions, yet they voted themselves a loophole in the debt ceiling deal. The Congress will give the super committee recommendations an up-or-down vote, no amendments or filibusters allowed.

To many, an agreement between the members of the committee seems unlikely. Several party hardliners were appointed, including Jon Kyl, Patty Murray, Max Baucus, and Jeb Hensarling. (I don't personally know that appointees other than Jon Kyl are hardliners--I'm depending on news sources.)

I'm more optimistic. The appointees may be more partisan, but that means their compromises will have more weight with colleagues. This isn't just a warmed-over Simpson-Bowles committee or Gang of Six, that is, the same people hawking the same plan. This time, core members of the parties are doing the negotiating.

The reasons I think they will strike a deal:
So the super committee is giving tremendous cover to the rest of Congress, but only if they reach a compromise. Major pressure to do something!

I care less about the specifics of the deal than how the rest of Congress reacts to it. But I'll throw out some predictions because I always do. On spending cuts, I think they will probably come to roughly the same conclusions as Simpson-Bowles. Taxes will be harder to work through, so maybe they'll establish another super committee, maybe they won't touch it, or maybe there will be some token tax increases in this deal. The last part of this prediction covers so many possibilities that it hardly counts as a prediction.

Update 11/17/11. It now looks like the super committee will fail. Read my updated analysis.

Posted by ModeratePoli at 1:37 PM

There won't be a deal, but I think that Max Baucus might surrender.

If the GOP agrees to ANY tax increase, their entire reason for political being and their entire message goes out the window. Nobody commits political suicide that way.

If the Dems are smart, they will trap the GOP into proposing just cuts in popular programs, and smash them on it. The Dems aren't always smart, though, and the GOP is much better at political tactics. I know you hate this kind of politics versus policy reality, MP, but that ship sailed already and the Dems cannot simply concede argument after argument to the political mechanisms of the GOP to be the adult. If the adults always give into the whining children, they aren't really adults, are they?

Expect more stalemate from and after this "super-committee". There's no movement on anything until after the election.