The Democrats are now in the stronger position:
Despite their weak negotiating positions, the best offer from the Republicans is:
It's no wonder that the Dems aren't agreeing. They hold a lot more leverage now, and the Repubs' offer is paltry. Republicans only seems serious about deficit reductions when social programs pay the price. They can dish out the austerity, but they can't take it. We'll have to see if they'll threaten a government shutdown by holding up appropriations next year. As far as I can see (for what that's worth), that is the only leverage they will have until after the election.

The debt ceiling fight was the historic crisis that prompted me to start this blog. If looks even more historic now. It's quite a reversal for the Republicans. I wonder if that's the price they paid for playing chicken, and which Democrat was responsible for that advantageous outcome. 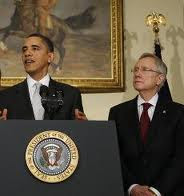 Despite this apparent win for the Democrats, the 2012 election is still up for grabs. I'm not going to predict which party is going to win, or which party is able to spin this to their advantage. So often, it has been the Republicans, so I won't count them out.
Posted by ModeratePoli at 12:20 AM

I agree with you across the board on this one. The Dems hold the high ground with this one, particularly with respect to defense cuts. Sure, SecDef Pinneta may say they would destroy defense -- a position the Administration should tell him to soften, mostly because what he says is NOT true -- but the head at the Pentagon ALWAYS says that.

As for the Bush tax increase time bomb, which is what the Dems should have called it all along, I say let it blow up on the GOP who created and demanded it continue FOREVER, and have the Dems be the hero by restoring it for the poor and middle class.

Fed Up with the Status Quo said...

While I agree the Repubs have taken the rope given to them, I don't think the Dems will come out of this unscathed. I am a bit surprised we (American people) haven't heard more from the Repub side something along the lines of "The Dems had the White House, Senate, and House and couldn't pass anything then, why would now be any different, they just don't want to help America" (or something like that). We need SOME cuts in defense, and domestic spending, but until our revenue increases, through a growing employment base in this country, we aren't going to make any headway. I believe it was you, on the other blog, that stated unless a lot of people take to the streets (not just the campers) Congress isn't going to compromise on anything. And shutting down the govt isn't the answer as it doesn't hurt them, it hurts the lower level employees. I still think we should vote them all out and start all over. If enough get fired, maybe the rest will get the message.

"If enough get fired, maybe the rest will get the message."

It depends how clear and consistent the message is. I think the electorate itself is polarized and often ignorant, thus it can't send a consistent message. The 2010 election mostly sent a message to go far right, but it wasn't consistent. If you can predict which way your specific electorate is going, maybe you can adjust. But maybe that's what has already happened, without benefit of Congress working smoother.

I think we need some primaries where a lot of people are participating before we know which way the wind is blowing.

Do you know which way the electorate is going? If so, how?

Off topic, I'd like to get your opinion on some of the topics we have on my blog www.commonsensestimulus.blogspot.com. Perhaps I could persuade you to post one of these days as a guest blogger? You bring a different view to the table, one that I think would be valuable to our discussions.

By electorate do you mean those that actually vote or Americans in general? I view these as two seperate groups. Voter apathy and a decreased interest in politics and national policy, especially by my generation and younger (I'm a Carter-baby) skew the primary outcomes with regards to a "true majority" consensus. Americans as a whole are unhappy with our government leadership as well as the direction of our country. This is not a surprise, but until "we" (we being those who care enough to follow, study, and get involved in politics and the political process) can motivate the unmotivated, we will see the party hardliners trudge to the polls and make decisions for those who simply don't care (until something happens they don't like, then suddenly they DO care).

@Fed up, Thanks for the invite, which is the first I've had. But I'm going to pass because of the major stylistic differences. I think I'm a tortoise, and you're a hare. So after looking at your site, I mostly want to pull my head in hunker down in my shell, and try to collect my thoughts. You've already got better traffic than me, so best wishes.

Please keep visiting here if you want, and please share the special insights when they hit.