"I could do better than this clown" 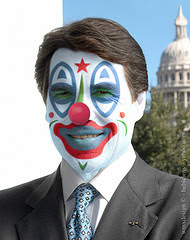 Most of the Republican candidates state that Obama's done a horrible job with the economy. A few of them will admit that the economy wasn't in good shape when he came into office. (Maybe that's the Republican form of compromise: we'll compromise on what the situation was, but not on the solution.)

Overall, though, the Rep candidates make it sound like Obama was a brainless fool in his handling of the  economy. It could've been easily fixed using good old conservatives principles.

I'll be surprised if this argument flies with most of the electorate. The economy was a mess in 2008-2009. Unemployment was soaring faster than any recession since WWII. People were rightly scared. They were angry about the bailouts, but that doesn't mean people thought they were unnecessary. Similarly with the stimulus.

These Republican arguments, if they don't jive with reality, are going to fall apart like tissue paper with a quick reminder of what those times were like. That's no guarantee the Democrats will do better however. They can spin a tissue of lies and unlikely scenarios too, and then the electorate will have to choose who is less bad. If you look over the last 30 years, the voters have mostly gone for the Republicans, so the Democrats better have good, believable plans, or we could have a change of government. Or I should say a change of clowns.

(In case you don't recognize him, that's Rick Perry. He was the best looking clown, but not the most likely to be nominated. I decided on eye-candy.)
Posted by ModeratePoli at 12:53 PM