** Warning - Depressing Assessment Ahead. You may not want to read this. **

I have a straightforward goal: I want a balanced federal budget. So I looked at our current horribly unbalanced budget (where we collect $2.2 trillion and spend $3.5 trillion) and I crunched a lot of numbers. The news is very bad, as you can expect when you are overdrawn $1.3 trillion dollars.


Revenue
Using a baseline of no income growth since 2009, I want to increase revenue to about $2.44 trillion. Due to job losses, payroll taxes will go down. We'll need to raise $1.25 trillion in income taxes, and I'd like to do it with a flat tax. As I wrote before, I think we should tax all types of income in the same way--no special rates for different kinds of income, like the bogus 15% rate on capital gains. I decided that on principle earlier, and now it saves me a shitload of number-crunching. My numbers are based on IRS statistics for 2009. By the way, personal income taxes totaled $953 billion in 2009.

Take Two -- Mostly Flat.  My second attempt is 18% on income between $25,000 and $100,000, then 28% on income over $100,000. And all those extra deductions that help you lower your taxable income--gone except for exemptions based on family size and disability. Under this plan, my own income tax would double. I, like everyone else, will have to take the medicine.

If you think we should raise taxes much higher on upper-income folks, perhaps to 40 or 50%, please consider that many can move out of the country, and may choose that option to escape such a high rate.

These tax increases are harsh after the marshmallow-soft taxes of Bush, but my plans for spending are even more drastic. They have to be, or taxes are going up even more. I really don't want to triple my income taxes or yours. 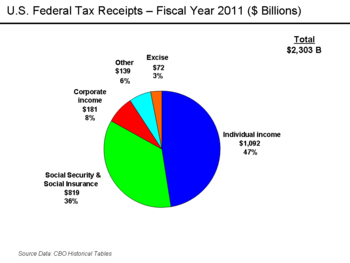 We have to downsize our federal spending by 30%, or $1 trillion a year. That means cuts everywhere. Let's see, cut:
Note that these are yearly amounts, not the 10-year totals that make a plan look better than it is.

Implementation
I don't know whether budget contractions and tax increases of this magnitude will send us into a depression. It's certainly a scary prospect. But barring economic cataclysm, I would do the cuts over 4-6 years, and all the taxes increases in the first year. Why? To make a bigger dent in the deficit sooner, while stretching out the job losses due to the spending cuts.


Lessons Learned Thus Far
Blame game.  The government, which ran up our debt so much (yes, George W. Bush, I mean you), fucked us up royally. They piled on debt and sent our economy into a tailspin, necessitating even more deficit spending. All the presidents since and including Reagan deserve a fair amount of blame, but Bush deserves the king's portion. Not to exempt Congress (which deserves equal blame with whatever president), Wall Street, businesses, lobbyists, taxpayers, and the electorate.

Burden-shifting.  I'd love to borrow good ideas for increased business tax revenue that can be implemented right away. These savings can somewhat reduce the personal income tax rates. Every $50 billion more in taxes on business (by closing egregious loop holes) gives our households approximately a 1% lower tax rate. Obama's plan has some suggestions. This is real incentive to find others.

Brackets.  The second tax bracket is at $100,000 instead of the usual $200,000 because of the $1.3 trillion pot of taxable income between $100K and $200K. Our deficit is so big that we have to capture considerable extra revenue, and it has to be done there. It's not personal, it's just mathematics.

Net worth. I don't know if this plan is politically feasible (ha ha) or economically sound. I will not be offering any kind of money-back guarantee. It may be a big mistake to come up with this plan, publish this plan, and be so painfully honest about it. If this is necessary to balance our budget, we might prefer default. But even with default, we probably can't avoid changes of this magnitude. I think I should research Argentina and find out how they handled their fiscal crisis.

Obama's plan is more optimistic about how much money can be raised by limiting deductions. His plan shows $70 billion a year, or 42% of what I aim for. I hope he's right, because that would make everything else less painful. One reason to be hopeful is that he has trained monkeys economists working on his plan. But it doesn't have a money-back guarantee either. Sorry folks.


And yes, I know this plan wouldn't have a prayer in Congress. Nothing sensible will, so why should this plan fare any better?

Update: 10/1/11. If you think this post was a waste, please read my defense. Then try doing a budget yourself and put it in the comments. I'd like to see how yours stacks up to mine. 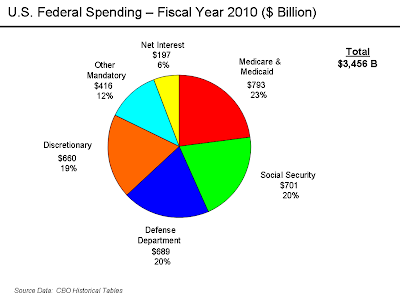 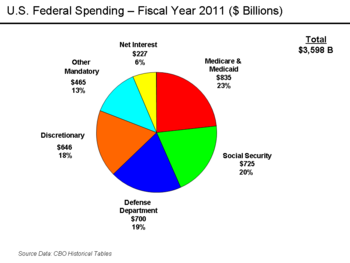 Posted by ModeratePoli at 3:49 PM

Now, assume - just for once - the US doesn't repay all its debt. Assume those who bought treasuries get a Greek haircut.

@Anon, You're wrong if you think I haven't considered the possibility of a haircut for US creditors. I certainly have considered it, but I don't like the likely outcomes, or the company it puts us in. We are a rich country, and we can pay off our debts if we get our house in order. We have no excuse for defaulting on our debts and thereby detonating a financial bomb of unknown power and far-reaching effects. @Anon, do you have a rosy outlook on default?

1. No deductions for state/local taxes?
2. How about a 30 or 32% bracket for millionaires of billionaires? I feel like the US would still be considered a low-tax country compared to other industrialized nations.
3.Would you consider privatizing Social Security, following countries such as Chile, the UK and Sweden to lower costs in the long run?
4.Would you consider a Public Option, to lower the deficit in the long run as well as premiums?

Welcome, DaGuy. Many questions, so I'll keep my answers short.

1. Correct, no special deductions for state/local taxes. I'd like to keep things simple. If there are deductions, I'd keep them few and with limits on how much can be deducted.

2. Not yet. I like a flat tax, but the need is too great, so I think we'd need a higher bracket for those you can afford it (over $100,000, probably). I don't want to cordon off the "rich" and make it OK to soak them. However, another commenter suggested taxing the rich to pay down *the debt* not the ongoing expenses. That would be self-limiting, so it has merits I'd consider.

3. I'd consider it, but I haven't researched it enough to have a firm opinion. The biggest problem with SS isn't that it's public, but that there's been no lockbox (read this.

4. I'd consider a public option, but a major portion of the electorate seems against it. Most people react quite irrationally to changes in Medicare, making it hard to work through how to get the cost-containment that we really need.