In this lesson, I have to ease off my usual how-could-you-forget tone. I had to do a bunch of research to confirm, and in some cases correct, my own memory of events.

Social Security (SS) was born underfunded. Maybe I should have researched why the founders in 1935 thought 1% per year were adequate savings, but I didn't. However, as far back as I can remember, which goes into the 1960's, SS was in trouble and in need of rescue. The employee contribution rate went from 1% in 1935 to 7.65% since 1990. 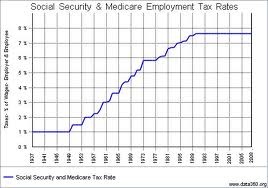 I remember the series of SS crises, as collections failed to keep up with current and projected pension demands. The Greenspan Commission in 1983 was supposed to fix SS for good. I guess politicians and voters bought the story, or maybe just felt that the taxes were as high as Americans could stomach, because the rates haven't been raised since the commission set the rate at 7.65%.

One thing that didn't happen was isolating the surpluses and making sure the money was available when the bulge of retirements started to tax the SS fund in the 2020's. This is where my research went off the rails. I expected to find that because there was no "lockbox" for the surpluses, they had been frittered away through tax cuts and deficit spending during the Bush II years. That's the Democratic narrative, anyhow.

What I found instead is that the SS trust fund never had a method of securing its surpluses. It always handed them over to the Treasury in return for IOU's. Unlike a normal pension plan, the SS trust fund not only didn't secure its surpluses, but it never invested them. It was always on the road to relying on US federal dollars for its own deficits when the baby boomers retired in droves.

The SS trust fund also funded most of our modest deficit spending for 3 decades. But starting in the 1980's, we ran significant extra deficits beyond that. So not only does the federal government owe the SS trust fund $2.6 trillion, but it owes non-government creditors nearly $10 trillion on top of that. 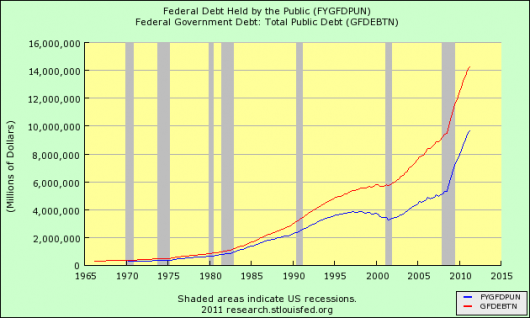 
One part of the Democratic narrative is correct. The SS payroll taxes were increased and that provided the federal government with ready money to fund extra spending and tax cuts and buy up yearly deficits, so that money was frittered away.

A more important truth is that, despite creating these surpluses, neither party in the 1980's had a plan that allowed the SS trust fund to use these surpluses. When you think of pension funds losing billions in hedge fund collapses, it's reassuring to know the SS trust fund isn't being used that way. But to find out that the money isn't even being stuffed in a mattress, that none of our top economists have ever figured out how to stash or invest or isolate or protect that much money, that is maddening.

All that time that I was being taxed, I was one of the many baby boomers who said "I'm not going to count on Social Security because it's not going to be there when I retire." However, finding out more of the mechanics now, it really hurts. OUUUUCCHH.

Even when the commission declared that the tax increases would keep the SS trust fund solvent in perpetuity, and it increased taxes ON ME and EVERYBODY to create much larger surpluses, THEY NEVER HAD A PLAN. Those surpluses were just thrown down the same rabbit hole. What the hell was that commission for? Why the f**k didn't the commission work on that part of the problem? My respect for Greenspan, which started dropping after he retracted his "irrational exuberance" comment and kept pumping up the bubble, just hit a new low. It's now tunneling its way to China. How appropriate. 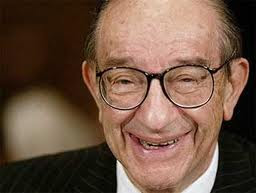 Posted by ModeratePoli at 8:58 PM

First, you have to get the facts right, although your basic point is correct.

The employer SS tax is still 6.2% on the same limit. That means that until 2011, 12.4% of the first $100K or so income (in 2011 dollars) when toward the retirement fund pool. If people actually saved that much on their own, tney would be able to give themselves a tidy little pension. (It's also the impetus around SS "privatization" schemes.)

The problem with the fund is not the contributions. It's today's life expectancies and demographics. We never put enough in during the earlier years, but those people are still drawing (and will for some time) pensions from the pool.

So the argument is either to cut benefits, adjust for life expectancy (just as benefits do with COLAs) or increase the taxes in some ways. All are unpopular choices.

Politicians and the commissions they create (which are political bodies no matter the clothes) don't do well with unpopular choices. I'd be for privitazation if I didn't know for sure that the rules would just end up benefits the favored parties of those same politicians (e.g., Wall Street). So, instead, I suggest we soak the wealthy to make sure that Joe lunchpail can retire and have a semi-secure old age. They will still be wealthy.

You're correct that I bundled Medicare in with SS, but the programs are handled in similar ways, so I didn't think it was misleading.

The problem with the fund is not the contributions. It's today's life expectancies and demographics.

Even if everyone had put more in, it wasn't stored in any meaningful way, so the money still wouldn't be available.

As for solutions, I predicted earlier that we'll be making both spending cuts and tax increases. The rich may be successful in avoiding getting soaked for a while, but not forever. And retired Joe Lunchpail won't be getting everything he hoped for either. Leaner times for everyone is better than pushing all the pain on one group.