It irks me when conservatives say that Obama owns this economic mess. He came into office during the deepest recession since the Great Depression. The job losses were staggering. I don't know how an honest person can forget this. I thought the stimulus was the right thing to do, and I think it prevented an even deeper recession, though we can't be sure. 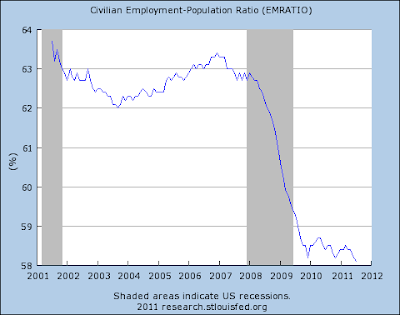 No one can turn our economy around on a dime. A deep recession like this, with a crisis in our entire financial sector, is not going to be fixed in one year or a couple years. This cancer grew for years, throughout Bush II's presidency, and for a while before that. This rot was characterized by dodgy mortgages and many other financial instruments like credit default swaps. It flared up in Enron's bankruptcy and the manipulation that caused the California power crisis in 2000 and 2001. How Obama could be responsible for all this is beyond me. Consider this: Roosevelt didn't own the Great Depression, even though it stretched through two of his terms.

If anyone owns this recession, it is Bush and the Republicans. They didn't rein in the financial and housing sector. There was plenty of evidence that fraud was permeating the sector years before the crash. I knew it based, amazingly, on reports on NPR and internet news. Anyone could get an income statement for any amount from an internet company, and use that fake statement to get a mortgage. If it's on NPR, why weren't there congressional hearings and congressional committee tightening up regulation and oversight? This is why I'm bitter when diehard Republicans or tea partiers blame Obama for the economy. I know it was screwed before he took office.

What's the fix for this financial dallying that has wreaked so much damage? It takes people with more financial knowledge than me to say. I can't analyze Dodd-Frank, and this blog isn't the place. Analyzing the blame-game, that I can do. So, I call bullshit on "it's Obama's fault."
Posted by ModeratePoli at 8:26 PM