The truth about media bias

Media bias is:
A)  a figment of the right's imagination.
B) everywhere but on Fox.
C) in the eye of the beholder.
D) everywhere.

I've been an observer of media bias for 20+ years. It started in the mid 80"s when a co-worker recommended Insight, a newsweekly put out by the Washington Times. I subscribed and noticed something odd-- their profiles of "interesting people" didn't fit the norm I was used to from the NYT magazine or New York magazine. I felt a vague difference, and reread the Insight profiles many times for clues. Finally, I realized what the difference was. NYT and New York did profiles of people who would be heroes to liberals. Insight did profiles of people who fit the conservative hero mold.

It's a big moment when you realize your perfect friend or hero or parent isn't perfect. It was a big moment for me to realize that the supposed objectivity of news was a whitewash. You could shade your reporting so easily by which stories you covered. You never had to be obvious like the communist propaganda we analyzed in 11th grade Civics class. In fact, that exercise was an anti-lesson, reducing the probability that I'd notice bias, instead of increasing awareness.

After this epiphany, I never read news in the same way. I always assume there's bias, and that objectivity is as impossible at completeness. You can never know or report everything, and you can never do it completely objectively. People don't think, write, communicate, or even read that way.

So what can you do as a journalist or as a reader? Give coverage to more opinions, seek many more viewpoints, read more widely. That's only the first step. You need to understand why a story is significant to one group or another, and what values that story reflects. Until you understand that, you haven't moved beyond your own biases.

Everyone should watch Fox News, MSNBC, CNN, network news, and TRY REALLY HARD to understand the message, not as a lie, but as a truth one believer is trying to impart to another believer. Start by thinking it could be true. If so, is there objective supporting evidence? What does it mean to a believer? And what values of the believer does it resonate with? If you can do this well, you can understand other viewpoints, and the world stops seeming quite so impenetrable, people stop being sheeple (or libtards or rethugs).

Luckily, it's just an exercise. You don't have to start believing everything, because a lot is tripe or blaming or demonization. But the exercise allows you to understand other opinions better, and understand other people  better. Hopefully, you'll be more respectful and more open to other ideas. And you'll know why you believe what you believe. That's powerful knowledge.

I stopped reading Insight magazine after a couple years. I realized that I admired many of the people they profiled, and I was more cynical of the the NYT/NY mag profiles. It was a very important step in my political evolution. Yours too, I hope.

Answer to the quiz question: Media bias is D) everywhere. It is often invisible to the reader or the writer, etc., but glaring to an opponent. 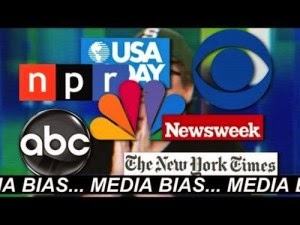