Alex Jones banned. The conspiracy theorist that Trump loves has been suspended on a bunch of major social media sites. A good article that focuses not on Alex Jones, but on the issues of moderation on social media. Twitter lagged behind, but it's not clear why. Lack of clarity was a theme.

Stalin's useful idiots updated. A great article by someone with a Russian name. Full of energy and unfamiliar angles. I think conservative talk radio types have been incredibly useful to the Russians, but the author points out it's not just them.

Success of solar and wind. Having excess energy due to solar and wind generation is happening more and more. Power companies may not be happy, but this is what I wanted as an environmentalist and someone who cares about the future.

China's misbehavior. China demanded and probably deserved some slack as it was developing, but it's quite a developed nation now. A former Obama administration official gives a blunt assessment that she didn't have the candor to give while Obama was in power. China also wants to make sure it has plenty of company as an authoritarian country. It's even helping Venezuela.

Reference link to save. Concerning where terrorists are most active. Great graphics with some interactive features. 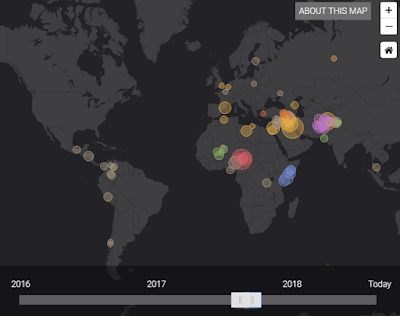 Posted by ModeratePoli at 11:14 PM