Since I follow mostly MSM outlets about the election and Russian meddling, I didn't realize there was a full-blown alternative narrative. This alternative isn't as crazy as Pizzagate because it has a number of data points (facts) supporting it.

The big picture is that the FBI, DOJ, and other intelligence agencies were run at the highest levels by personnel who wanted Dems to win the 2016 election, and who acted in dishonest, biased, and corrupt ways to help with that goal. When the Dems lost, they acted to stymy the incoming president (Trump) with fake, trumped-up charges.

These charges, if accurate, are extremely serious. We definitely don't want our government agencies deciding who wins an election. That's for the voters to decide.

The theory is that top DOJ, FBI, CIA, etc. officials were biased and acted illegally. So who is being accused:

The theory goes that the high-level Dems got the FBI, CIA, etc. to send adjuncts to entrap people in the Trump campaign, make it look like there were ties between Russia and Trump campaign personnel, start a witch hunt, dirty Trump, and hobble him.

Supporting this view are these actual data points:
These are the known, undisputed data points. In the reckoning of some theorists, this points to a conspiracy in the intelligence community to hobble Trump by accusations, leaks, and investigations.

However, this theory ignores many other data points, like the DNC being hacked, purportedly by the Russians. Of course, maybe you can't trust the intelligence agencies to be truthful about who did the hack. But there certainly was a hack, and the stolen info was disseminated by Wikileaks. So the Russia investigation cannot be a total con jobs, since the hack was real.

Also real was the Trump Tower meeting, and the Trumps' attempts to hide this meeting and what the subject was. Many connections between the Trump campaign advisors and Russians are not disputed, like contacts with the Russian embassador. Mike Flynn lost his job for lying about his connections. Jeff Session suffered well-deserved embarrassment and was forced to recuse himself as Attorney General overseeing the Russian investigation because of his amnesia related to his contacts.

This article from The American Conservative explains the two highly disparate ways of interpreting these facts, calling them 'narrative A' and 'narrative B.' Narrative A is that the security services followed up properly on reasonable suspicions, and did their patriotic duty. Narrative B is covered here--that the intelligence services conspired to spy on the Trump campaign and disable Trump as president.


1. Page and Strzok were lovers sending casual, low-significance texts to each other. These were simple texts, not part of a conspiracy that has no other paper or electronic trail.
2. Steele got some things right in his dossier, such as Carter Page going to Russia and having meetings with high-level officials.
7. The Russian lawyer from the Trump Tower meeting was paying FusionGPS for work it did for her. She and/or her clients paid FusionGPS; they didn't pay her, so she wasn't an employee of theirs.
8. Comey's notes, far from being unusual, are very typical documents written about any non-trivial meetings.
9. There was a huge uproar after Trump fired Comey, and even many Republicans were calling for a special counsel appointment.
10. It is not unusual for a counter-intelligence investigation to use operatives like Halper in hopes of finding out significant helpful information.
11. Mueller chose for his team people whom he had worked with in the recent past, including in private investigations. He also chose high-ranking FBI officers. This is normal.

This leaves some fairly major suspicions, like the Clinton campaign and the FBI both hiring Steele, and then hiding this information. Come on, people, you're not going to be able to keep a secret like this. You need to come clean, and do it early.

Nonetheless, I still believe the narrative that the intelligence services needed to check out the activity of the Russians and possible connections to Trump, and they did their duty. 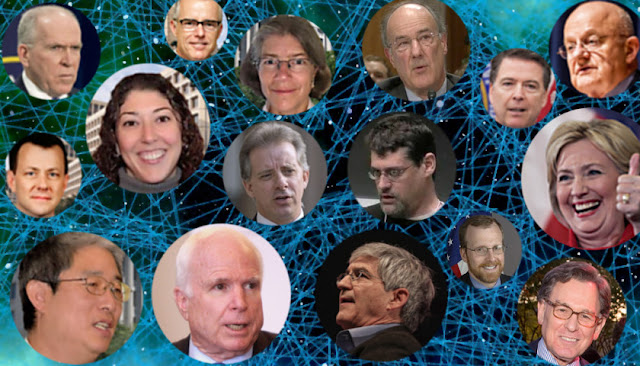 Extras. Some sources supporting the conspiracy narrative - Investor's business daily: Ohr connection, IBD: McCabe 25th amendment testimony, IBD: Investigation started before election, Gateway Pundit, major pusher of the theory. GQ calls it a theory out of thin air, but I've shown that there is substantial data to support it, though not enough for me to think it's the best interpretation of the data. Barr doesn't call it treason. GOPers and their mistakes/lies about the Steele dossier and FISA warrant.

Posted by ModeratePoli at 8:06 PM