Antifa is not the biggest violent threat. ... no matter what GOP pols say. The alt-right, neo-Nazis, white nationalists are a much bigger threat, but it's not politically useful for Republicans to acknowledge. They want antifa as the boogeyman. Related: A guy wearing a MAGA hat was beat up. Oh, those violent lefties. Except that he went to several bars soliciting fights. In video, we can see the lefties telling him that no one is going outside to fight him. Ummm... never mind.

Dictator-like move in Great Britain. Boris Johnson pulls a nearly unprecedented move to prevent Parliament from unseating him. I think Parliament will have a few days in session, and hopefully will remove him. Update: The British Supreme Court struck down the closing of Parliament, so Boris Johnson will have to face them.

Learning about the 2nd amendment. Here. Quite comprehensive.

Problems with e-verify surface. After a major raid on poultry processors. Good info to know.

Election prediction succeeded in 2018. How about 2020? I'm not unbiased, but I see skewing of the prediction, with progressive being favored. The political scientist points out that progressive did better than expected in Texas and Georgia compared to blue dogs in Missouri and Indiana. But they all lost. What about in Arizona? Well, it was a centrist Dem who won there. Odd to ignore that. Related. The Trump campaign is very worried about suburban women - worried that they'll lose the 2020 election.

Red flag law in California. Not a big sample size, but none of them became mass shooters. Frankly, we can't know what was prevented, if anything. But prevention is a worthy goal, especially considering that we are preventing deaths. In the last two weeks, there have been a spate of reports of people arrested for having caches of guns and worrisome plans, but before anyone was shot. That seems preferable to me, right?

A moderate view on US intervention. Police the worst places to shut down the worst of the safe havens. 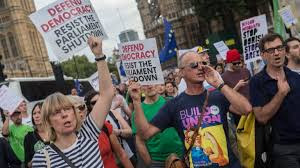 Posted by ModeratePoli at 7:38 PM