Short: Will the Senate go Republican?

The one problem with a sweeping Senate victory is trying to keep all those seats six years later.

So, in 2006, the Dems had a great year, and now, in 2012, they pay the price. I've written before about why I'd like the Dems to hold onto the Senate. But it's not likely. Look at the blue states that would need to stay blue, and then tell me how optimistic you would be. 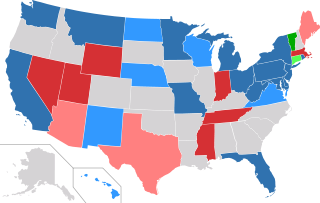 Interested? Current odds at Intrade, overview at Wikipedia, and an older rundown on some of the races at Reuters.
Posted by ModeratePoli at 9:50 PM

While to Dems will certainly lose some seats in typically red states like North Dakota & Nebraska, they are in a position to pick up seats, possibly, in Massachusetts, Maine & Arizona. I think Nevada is also in play.

We have to wait until closer to election day to handicap this, and Senate outcomes are many times linked with general election outcomes due to turnout. Most GOP establishment types and elected officials support Romney mostly because they think that he will probably keep the election close enough for down-ballot victories, even though they hold limited hope that Romney can defeat Obama in an improving economy. That's their real interest and they know a Santorum or other nominee might be swamped early, leading to low turnout for other races.

It may turn out that Romney gets swamped anyway, but I think they still see that anti-Romney sentiment is less likely to hurt down-ballot GOPers, although the GOP brand is very tarnished particularly among suburban women and, in some places like Ohio & Wisconsin, among working class men.

I don't like to generalize of media-labelled groups. But the patterns are clear that unless there's an overriding national issue or personality in the race, most people fall back to rooting for their long-time team. A very weak economy would be such an issue, but that doesn't seem in play for most people, no matter how much Romney wishes it was so.

Hence, in states with GOP governors are unpopular -- which happen to be those swing states from 2010 where the GOP swept -- Obama is now way ahead because ANY Republican isn't trusted as much among those that might default to them. For example, Obama ahead of Romney by 15 points in Wisconsin.

@Anon,
A belated thanks for these insights. I'll bear them in mind and watch those midwestern swing states.