Writing about race - my FAIL

I worked so hard on my response to Derbyshire's thrown-off embrace of the black inferiority theory, but feel that I failed in writing that post. I spent so long arguing about possible interpretations of IQ test data, that I didn't focus on other more important issues.

Some groups in the US would want the issue to be "Are blacks less intelligent?" but we can't really discern whether that's true or not due to the complicating issues I wrote about. However, straightforward acceptance of the question overlooks a huge issue. The question is insulting. Yet I barely touched on the ethics of singling out a group for that sort of question. I argued it like a factual question, but in reality, it's a whole different kind of question.

So I've reneged on both my moral duty and my usual goal to talk about solutions. I think I forgot to drill down and look at the deep meaning of the question, not just the superficial meaning. And the deep meaning is best illuminated by the history of assertions that one group of humans is inferior to another group.

I wonder whether this question is too big for me to grapple with. I worked hard, yet I lost my bearings. I'm somewhat surprised by this. Talking about budget deficits--that's within my capabilities and comfort zone; talking about race--as hard as I try, I'm dissatisfied with my thoughts and with what I write. But I still care immensely. Please accept my explanation for this failure, though I can't promise it won't happen again. 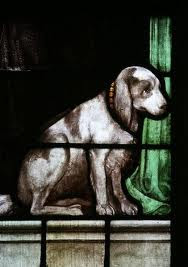 Dog at the foot of the penitent
Photo credit: penick.net
Posted by ModeratePoli at 3:24 PM

MP -- thanks for linking to this post in a recent Plain Blog comment. I've just read through it and the pier it links back to and the piece that links back to, and really, they're beautiful. It's very hard to talk about how hard it is to talk about something as a way to move forward in talking about that thing rather than as a cop-out, an excuse (or excusing explanation) for not talking about something you acknowledge as significant and relevant. And you're too harsh on yourself when you say the other post is mostly wrong, for even engaging with such an insulting and unserious contention. Unfortunately, we're (still) at a place where it's necessary to engage in demeaning, humiliating conversations sometimes.

[Like when a man says "I don't understand what's so bad about whistling at a girl on the street. I'd love it if a girl complimented me like that!" and you just want to shake your head and not deal, but it doesn't help the situation if you assume that he's speaking in bad faith. Sure, it's possible that he's actually completely aware of the differences between a woman saying "hey nice shirt, would you like to get a drink" to a random man and the equivalent (except that there isn't really an equivalent -- but the parallel) situation with sexes reversed, and is just not being very civil to you. But he also probably has never been followed for blocks by someone he didn't know who kept talking to him no matter how fast he went, or groped on the subway, or hit on repeatedly by a taxi cab driver who ends with "and I know where you live, too!" ... (Wow, living in small-town New England has some serious advantages over Brooklyn, doesn't it!) And even if once he understands your point he is a jerk about it, there's probably someone else there who hears and learns something that had never occurred to them, and does respond positively. Even if the author who prompted those posts is just a not-nice person, there are a lot of people who don't really know what to think -- and helping them take a critical perspective on the question as it's posed is a public service. The more so when you later add that that wasn't a great framin question in the first place.

Btw, on the IQ gap ... there's published research to the effect that, at least for average and disabled people, a black person functioning at cognitive level x will typically have an IQ score about 15 (!) points lower than a white person who's functioning at the same level, as measured by the set of basic skills they have. I read this in a piece about how often black disabled people are served really poorly by a system that treats someone of basic capacity as disabled, someone disabled as severely disabled, someone severely disabled as barely functional, ... It's further the case that reading about the founding and history of IQ testing is enough to make one doubt that it's even trying to measure some pure intelligence, as opposed to certain kinds of intellectual and social competences. Plus, uh, the fact that average IQ scores rise roughly fifteen points every twenty or thirty years, at which point the scores are recalibrated back to average = 100 ... uh ... does not reinforce the supposition that they are measuring anything with a strong Genetic basis ... unless every generation is regularly getting that much smarter than the previous ...

Oh super-long comment. So, to reiterate: thanks. I appreciated these posts very much.

Thanks for your message. I reread my Derbyshire post. I'd forgotten that I'd written a preamble "Why this is hard to write."

I also think I'll do editing to include in that post the point I made here (that questioning the humanity, intelligence, or good will of groups of people is actually beyond insulting, but is degrading and dehumanizing.