This trick worked so well for Claire McCaskill when she ran a campaign ad asking if Todd Akin was too conservative. The primary voters in Missouri fell for it, but our Washington pols are supposed to be more sophisticated, right?

So, will Paul Ryan become toast after the blessing by Harry Reid? I don't actually think so. Harry Reid runs Hail Mary political plays with some regularity. Remember the super-secret confidence about Romney's taxes? It didn't work, but he tried it anyway. This is just another example of a Harry Reid desperate move. I'm guessing Paul Ryan's chances are pretty good, and Harry Reid won't be able to change that. But he stills tries. 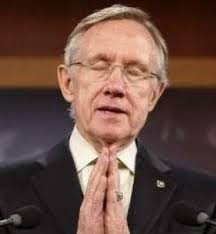 Update 10/21/15. I looks like I'm doing pretty well in my analysis. In a comment at Bernstein, I wrote this:

[Ryan's candidacy for Speaker] is a serious offer, and I think it's going to go through. He's the best hope for the House GOP. If it isn't him, they'll have weeks or months of turmoil, with debt ceiling problems during that time.

He'll probably be able to peel off enough of the hardliners... He's playing hardball by demanding a public endorsement, which might mean getting over half to endorse him. That's a pretty high bar. He might back away from that requirement if he gets enough support.

I also wrote that it wasn't a worrying sign if some Freedom Caucus reps were loud in their rejection, as long as the number didn't go above 20. According to this report, Ryan got support from 70%. I guess that means most are not as dumb as they seem. They can do some (political) calculus.
Posted by ModeratePoli at 7:31 PM