Hillary panders on the Cadillac tax

This is disappointing but not surprising. Hillary Clinton is calling for the repeal of the Cadillac tax provision of ACA. And like many repeal proposals, she's vague on what she'd do to make up for the lost revenue. Actually, she's silent on what she'd do.

This is just bad, typical pandering. Some unions want to protect their benefits as much as possible, and they don't want members hit with the punishing 40% excise tax on the primo health benefits. However, the premium must be over $27K for a family. That's pretty damn high. How many people really have such generous health benefits?

I couldn't readily find any numbers. Companies have been trying to change their plans in preparation for the Cadillac tax starting in 2018, but also to rein in health insurance costs and to get employees to share the burden. I don't think that's at all bad. It's better for employees to be aware of healthcare costs, rather than treating it like a perk that someone else pays for.

The arguments for repealing the Cadillac tax aren't very strong. Opponents claim that it will hit 82% of all employers by 2023 because of the indexing (if they don't make adjustments, which they are). That leaves plenty of time to adjust the indexing if needed. Opponents also don't answer about how to make up for the lost revenue, which is just so typical. 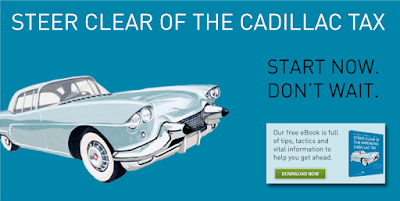 Posted by ModeratePoli at 12:53 PM