Well, no, the conservatives didn't say that. Hardly anyone in politics or punditry admits a mistake, so it's no surprise. But it did mute their cries for the US to get further involved, especially as a strong man dictating what should happen. Maybe it also paused their admiration for Putin as a strong man who gets the job done.

The downing of the Russian plane should give everyone pause. Russia may want to respond by shooting down some Turkish planes or destroying something in Turkey, but there would be a high price for doing that. Turkey is in the NATO alliance, and you can't just start a war with a NATO country without bringing much of NATO down on you. Because of that, I think Turkey isn't going to suffer any major consequences for downing the plane, and Putin is going to have to take his lumps on it.

Charles Krauthammer, a supreme neocon, is backing down somewhat. He said these unexpected words:

The credit being that Obama doesn't want Russia in the coalition fighting ISIS--the coalition having 65 member countries. Krauthammer was singing a different tune just 6 weeks earlier;

I agree with Obama's limits on involvement. The Syrian conflict is amazingly messy, and no side is going to get a clean win, no matter how much money and troops they commit. If that's true, that there can't be a clean win, what should our strategy be? Does military history provide us with an answer?

Not that I know of. It doesn't look like anyone else has the answer either, no matter know loud they shouted a week ago. 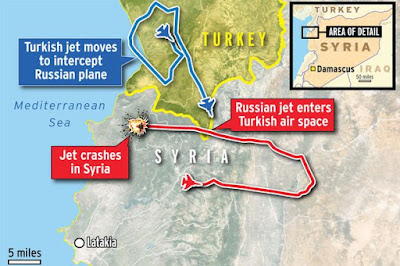 Extras. HotAir has little analysis of what it means to the US role in Syria. Marco Rubio thinks Russia got what it deserved. Paleoconservatives, being a different breed from neocons, say that this clearly shows what a mess Syria is. Weird theories from the internet here and here. Much more sober analysis here, including a reminder that this would be much more common with a no-fly zone. Hillary will want to rethink her support for a no-fly zone if she's elected. Finally, a round-up of crazy courtesy our presidential candidates.

Posted by ModeratePoli at 2:37 PM