Where is the battle? Why is it there?

I've been very busy with work and reading a slew of interesting books. That prevents me from going hyperbolic over the terrorist attacks in Paris, but I wasn't likely to go hyperbolic anyway.

The attacks in Paris aren't surprising. There are a lot of Muslims there, and some are radicalized. Military-style weapons aren't readily available, but they can be smuggled easily enough from other places where they are readily available. Perhaps the surprising thing is that there aren't more attacks. And not just in France, but all over Europe, in the US, in Canada, Australia, Saudi Arabia, India, Egypt, Jordan. Why are all these places relatively quiet versus the level of bombings in Iraq or in much of northern Africa?

Of course I'm glad that we don't do have all out warfare over much of the globe. But wouldn't it be helpful to understand why some areas are fairly peaceful and others aren't? It is because the security and surveillance networks are working well in the US, but less well in France? Maybe there are other reasons.

Another question is how bombing more targets in Syria, which France has started to do, has anything to do with terrorists acts in France. The problem is in France, not in Syria, isn't that correct? That seems the obvious logic to me, and there would have to be quite an explanation for why the problem is in Syria, and not France. Of course, the French response could be a case of do-something-ism--making a show of a response.

I may be asking questions that don't take many words to express, but the answers aren't going to be simple. Some people, like too many commenters on this thread, want to wipe out all Muslims, or maybe just all violent Muslims, or all Muslims in the middle east. Ideas like that are fraught with difficulties--moral, ethical, operational, etc.

So when I ask a simple question, I'm not looking for a simple answer. I'm hoping for a greater understanding of very important, difficult, widespread, and deadly issues. Don't try to give me a quick fix. It's not going to work, and most of us know that. 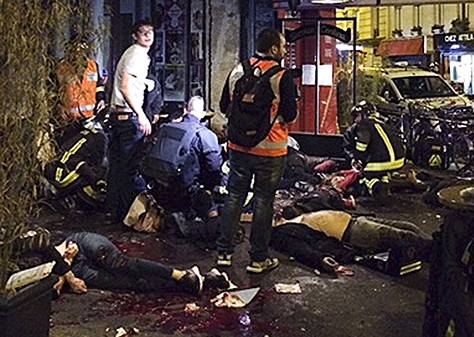 Complaints that Obama isn't hyperbolic in his response. What part of "It's going to take time" is wrong?
Posted by ModeratePoli at 4:19 PM

The first things to consider are:

1) The media is in the business of getting attention to sell stuff, so they hype anything with outsized fear and risk assessment because that grabs people's attention.

2) Political interests trump common sense among partisans, particularly when the media are playing along, so one cannot consider any policy recommendations offered under such circumstances to have much authority to support them.

3) Action is prized more than words, provided those actions can produce positive optics and when negative consequences are likely to fall on someone else and/or in the future far enough removed from the action to avoid blame.

So the simple answer is that the Paris attacks and other like them are only tangentially connected to lawless zones. There may be some associations among the participants, but as a tactical and strategic tool, terrorism is a loser unless deployed against a population on which you already exert authority. That is, terrorize people under your control and you can keep them submissive. Terrorize someone you can't control and they will hunt you and your associates down.

Naturally, such nuanced and calm analysis is no match for fear-mongering. Without an enemy against which to seek justice (or vengeance), tenuous connections take an huge importance, such as a set of people who call themselves "ISIS" or whatever, but are really just murderous thugs after personal satisfaction or with an axe to grind. And it's easy to say that this murder was a Muslim, or at least called himself that, so anyone who calls themselves that or looks like him is a potential threat. So we need to bomb them or isolate them or whatever. And that just increases the fear, divides peoples, and sets up a vicious cycle.

Will the fearmongers be cowed by relative peace or pay the price for their encouragement of cowardice and suspicion? Probably not. Since the media had echoed it and that has become the historical fact, they can fall back on "better safe than sorry" and other platitudes for their efforts to, essentially, make common cause with the goals of the terrorists for their own gain.

So the simple answer is that the problem is not in France or Syria, at least not exclusively. The problem exists wherever their are people, at any time anyone for any reason might decide they want to kill strangers and die in the process, and there's not much anybody can do about it without sacrificing freedom. The problem is fear itself. It leads people to make very ineffective decisions and reduces fear not at all.

@dangerous, I agree with so much of what you say, and I appreciate how well you expressed. Definitely yes to 1, 2, and 3 as an explanation for what is happening.

if you want to fix problems, you're going to have to deal with some very serious, expensive, and unsexy solutions. Because life isn't simple, and you can't just bomb your way out of trouble.

@EngLit, absolutely agree. Unfortunately, few politicians or pundits tell the truth on that. It's as though it's unAmerican to say something will be difficult.

Although I agree with much of your post, I believe the problem is Syria and that the French reacted correctly with an immediate retaliation. It's obviously not the way to a long-term solution which requires fundamental and extensive modifications of thought processes from all involved parties, but definitely a short-term rallying point for a demoralized populace.

@greg, I feel the French response is quite incomplete if all they do is bomb in Syria. Don't you feel that way too?

I would also have to agree with the commentators who state that Syria is the problem. Syria is a training ground for terrorists and is also a refuge for those looking to hide. Cutting off the head of the monster is SOP when it is a viable option. Debilitating Syria is an important goal and the French definitely made the right move in that direction.

@greg, I don't think Syria is "the problem." The problem is Sunni vs. Shia power struggles in the Mideast, and that isn't confined to Syria. Instead, Syria blew up so much because of the Sunni vs. Shia struggles, and the money and manpower that was poured into the Syria fronts of that struggle.

I misremembered the origin of ISIS, thinking that it began in Syria. It certainly became stronger and much better known because of its fighting in Syria, but it existed before the current Syrian conflict. Here is a very interesting article I read about the origins of ISIS: http://www.cracked.com/personal-experiences-1780-we-built-their-death-squads-isiss-bizarre-origin-story.html