I almost missed this. Jews are not damned to hell for not accepting Jesus, according to the Vatican. Not only are Jews not damned (despite that crucifixion two thousand years ago), are they saved and are to be considered 'elder brothers.'

But let me clarify. At first I thought the pope himself had declared this. No, afraid not. It was a Vatican committee. And the committee can't quite explain why Jews are saved, instead falling back on the well-used excuse of divine 'mystery.'

Does this sound like they've discovered something new (and convenient)? Maybe, but they claim it's based on St. Paul's epistle to the Romans. It was in there all the time, but was ignored for, um, a few centuries or more. Too bad for all those Jewish criminals killers sinners victims during all those years. 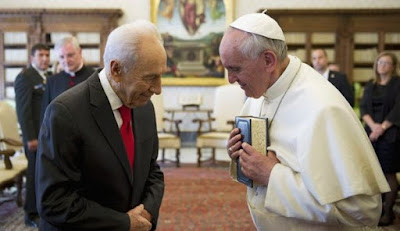 Extras. Sorry, but the Vatican is wrong about this. There's not an exception for Jews (and it's proved by different bible verses). The only reasons I saw this--because of click-bait about Kim Davis and her fabulous victories this year.
Posted by ModeratePoli at 9:23 PM