Blaming the talkers, not the shooters

Is Harry Reid right when he blames the murders and shooting at the Colorado Springs Planned Parenthood on Republican politicians?

There are some good arguments for leveling some of the blame on them. Many of them aren't moderate in their statements, but instead ramp up the anger at those who support and provide abortions to the women who want them. They don't take the extra few seconds to remind people to try to stop abortion only through rational, respectful discussion. The GOPers as a whole have quite a history of lying about abortion, like 90% of what Planned Parenthood does is abortion. Shouldn't the GOP be held responsible when lies like this influence someone to kill? When I put it like this, yes, it seems they should be partially blamed.

But then I tried a thought experiment--do I feel the same about protest movements that I have more sympathy for? How much do I blame the Black Lives Matter movement for execution-type shootings of police? The answer to that one is easy--I don't blame Black Lives Matter, or the vast majority of their advocates and supporters. A few protesters have encouraged the shooting of police, but very few. And even then, they weren't directly involved in shootings, so they aren't guilty of incitement or conspiracy. I'm not even sure there is a crime for what they did, if all they did is yell.

So, am I going to have a different standard for conservatives and their causes than for liberals and their causes? It might be tempting, but I'm not. People are morally responsible to the lies they tell, or for the hate speech they mutter or shout, but they're not responsible when someone else pulls the trigger--unless they cross the gray line between advocating a position and advocating specific violence.

Am I right about this position? I'm not totally sure. However, I don't want to choose what is expedient, but what is fair. 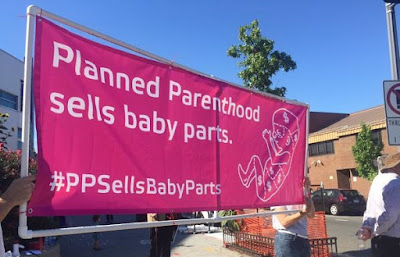 Is it a lie? Is it incitement?
Image: lifenews. com

Extra. Ed Kilgore, a mildly progressive blogger whom I read often, makes a good argument for assigning more blame. But I'm not convinced, because sometimes the shoe is on the other foot.
Posted by ModeratePoli at 9:06 PM

You have some decent points here, but the real question is: what is at the soul of the protest? For Black Lives Matter, they are protesting against the flagrant violence and/or indifference by authorities to the civil rights of members in their community. For abortion foes, they object to people exercising their right to control their own reproductive choices and, particularly, those who help them.

BLM says, in essence, we deserve respect and basic human decency. Anti-abortion activist say, in essence, we don't approve of what you are doing. There's some similarities, but the critical difference is that BLM is protesting the action of public servants in their official duties. The other side is protesting private actions of private citizens.

Violence in either case is criminal and nobody trying to advance their agenda would openly support it. So consider what happens when a policeman is executed. Does that advance or hinder the BLM agenda. Of course, it hinders it because authorities are going to be less likely to avoid profiling and violence in response. But what happens when abortion providers are targeted? I doesn't produce more abortions. I probably means fewer. The violence helps to achieve the aim of the movement.

Hence, their is greater responsibility on the anti-abortion movement leaders and politicians to remind its adherents that abortion is not so evil that violence to prevent it is warranted. But you don't hear that at all. The leaders' attitudes when violence like Colorado occurs is more of a shoulder shrug than outrage at the violence. From their perspectives, there's some justice in it.

There are, of course, radicals in the BLM movement or others semi-allied with them who dismiss violence against police on the same basis. However, such a position works at cross purposes to the real goal of the protest. Violence against abortion providers does not.