The strange struggle between NYC cops and mayor

I'm having a very hard time understanding the disagreement between the New York City cops and the mayor. Why are the cops so incredibly pissed off at Mayor DeBlasio? He's not directly responsible for a maniac from Georgia shooting and killing two cops in Brooklyn. (Who's directly responsible? Obviously the guy who did it, but he killed himself so there goes the chance for vengeance.)


The case against DeBlasio

When a situation makes no sense on the surface, there are usually factors below the surface, and that's the case here. It was fascinating to read a non-ranting explanation of why the police force is upset with the mayor. DeBlasio ran as a progressive who would end police stop-and-frisk policies and give a friendlier ear to minority complaints. In itself, that shouldn't anger the police. However, DeBlasio took that friendship to places that were bordering on offensive. DeBlasio has embraced Al Sharpton as a major ally, even seating him in a place of honor at a large public event that was supposed to be conciliatory. Sharpton has never apologized for the times he was wrong about supposedly racial incidents--not for his role at Ferguson, and not for the Tawana Brawley accusations. This is a double-standard that supports minority grievances and blames police 100% of the time, so I understand how the mayor's embrace of him angers the police. As a bit more gasoline on the fire, the boyfriend and son of a top aide to DeBlasio's wife tweeted remarks about 'pigs.' There are to be plenty of reasons for the police to be angry with the mayor.


The case against the NYC police

But it's equally fascinating to see forces within the police pour accelerant on their justified anger. Possibly even before the shooting of two officers on Dec. 20, some police circulated a request that the mayor stay away from police funerals (not it's not a new tactic). The head of the PBA (Patrolmans Benevolent Association) said that many people had blood on their hands and it "starts at City Hall in the Office of the Mayor."


And of course there's the biased media

I consider that rhetoric to be over the top, but it's not the only extreme rhetoric against the mayor. In the New York Post (a Murdoch-owned newspaper with pulp standards), a columnist wrote:


"Determined not to let a crisis go to waste, the mayor has spent the last two days cranking up the volume and the vitriol of his anti-cop agenda... Imagine that. The city is in turmoil over the Staten Island case and the mayor throws gasoline on the fire by painting the entire police force as a bunch of white racist brutes. Has he no shame? He certainly has no facts."

It's unlikely that the mayor "has no facts" or that he said anything like "the entire police force as a bunch of white racist brutes." Attributing those sentiments to him is vilification, which is obviously what the columnist intended to do.

It's not just a local fight either. Here's Bill O'Reilly:

"...many on the left believe the American police are the guardians of the oppressive justice system. They prop it up.

Apparently that is what Mayor de Blasio believes, that there is injustice among his own police officers... That point of view that the left is putting out there saying the police are instruments of oppression rather than a protective force is causing outrage on the part of the cops themselves. Any fair-minded person can understand that. It is easy.

...'Talking Points' believes Mayor de Blasio does not respect law enforcement, has directly insulted each and every member of the New York City Police Department and should resign his position."

O'Reilly mixing in a few reasonable points, but he ends up over-the-top nonetheless--calling for the mayor to resign not for what the mayor did, but for how the most disgruntled can spin it.

Strangely (again), the head of the PBA (Patrick Lynch) got some of his own medicine, as some police shouted at him that they wanted more equipment, not the apology that Lynch insists on. Pushing ensued, but no injuries. Polls show pushback from the populace against the disrespect among the police.

So far I've given more criticism to the police and conservative media who are fanning the flames. But what has the mayor done to worsen the situation? Working with Sharpton and similar minority individuals and groups. The rhetoric of these groups varies. Some marchers against the lack of criminal charges from the death of Eric Garner chanted "Black Lives Matter" and "Hands up, don't shoot." On the other hand, one break-away group chanted for "Dead cops."

The extreme groups are definitely a problem that taint those protesting police actions. How do you draw a line between a peaceful protester and those a short distance away who are burning and looting? For the peaceful protester, the choice is tough, You may not want to give up a legitimate protest, yet you don't want to be associated with unwarranted hooligan behavior.

I personally have no trouble distinguishing between different types of protesters, but it's not just that some are responsible and some are violent. Some advocates, like Sharpton, will never change their rhetoric, even when the evidence shows that guilt and innocence weren't as originally portrayed. I don't know whether DeBlasio looks at evidence or not. I know that many of his detractors don't look at evidence, however. Is there something wrong with DeBlasio supporting retraining so that police use less force? I can't see what's wrong with that. We consider changes in medical procedures all the time to reduce negative outcomes. This is an intelligent response, not a hateful one.


Why do folks have to hate?

Maybe what surprises me the most is that too many people reach for the hateful response. There were responsible demonstrators in Ferguson who stopped looting, and then there were the looters. There are the people hoping that police will be killed ("pigs in a blanket, smells like bacon"), and then there are the ones who mocked the dying words of Eric Garner, who died during an arrest. Why all this nastiness?

And even among those who aren't as hateful as this, why can't they work to find some middle ground and understand the important issues for the other side? Do we have to vilify everyone who doesn't agree 100%?

I'm rather hoping that the people of New York City will be able to demonstrate how to let tempers cool and move on to a more productive dialogue. Maybe that hope is crazy, but the alternative is even more heated words and protests. There won't be a constant ratcheting up, cooling will happen sometime, so now is a good time for it. I recommend a new chant: 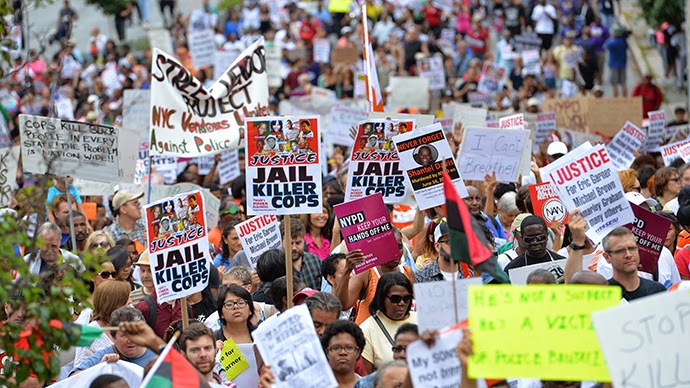 Extras. The police chief of Nashville is an example of cooling tempers. What would happen if you screamed into the face of a white cop? It depends on the cop, what kind of day he's had, and lots of things.

Posted by ModeratePoli at 10:53 PM

They way I read the NYC police response is that they would rather lash out at a convenient target that look at their own members' complicity in creating this situation. While no police officer deserves to be shot down simply by wearing the uniform, the police were quick to fall in line behind the officers who, in effect, executed a man for being large, black and selling individual cigarettes. Perhaps if some of their members had loudly admitted that perhaps the officers on the scene had overreacted, the mayor would not have had to so public spoken the truth about that incident.

Cause and effect are pliable items for interested parties, as is scapegoating. If I'm passing judgment, the police are blaming the mayor to avoid either looking in the mirror or blinding siding with those who wear the same clothes.

@dangerous, I think there is a lot of politics and defensiveness in the cops' actions--too much, in fact. However, there was also a lot of ugly reaction on the part of anti-cop groups. Just look at what you wrote, that Garner was "in effect, executed."

That makes it sound intentional, and I don't think it was. I think the cops did a lot of things wrong with Garner: ramping up the situation that was actually calming down, using a chokehold, putting pressure on his neck and the back of his head, ignoring his pleas for help, slow and completely inadequate response when he became comatose.

However, they are also up against people who act like the police never do anything right, but should always be assumed to be wrong. That includes people like Sharpton, who even has a national cable news show. Whenever there's a shooting of a cop, do people from the neighbor show up and protest against the shooter and in support of the cop? No. The message they send is that it's fine to accuse cops, swear at them, hit them, shoot them, but it's beyond the pale for the opposite to happen.

Here's case where a teenage girl hit a cop with a car, and they shot her, she died, and according to the neighborhood, the cops were in the wrong. When is someone in these communities going to stand up and say that attitude is wrong and lead that kind of march?