That's the headline to this Politico story. Is anyone stupid enough to believe this bimbo charlatan? Answer: probably yes. Plenty of idiots believed in her in 2008 and then in 2012, when she teased and teased.

However, the piece shows how unserious she is. "I'd rather talk football" sums it up. Gaaagggg! 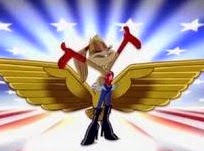 Same day update. The Hindenburg windbag Donald Trump says he's thinking about running for president too. This jackass circus is brought to us by the "Freedom Summit" in Iowa.
Posted by ModeratePoli at 12:01 PM