Will we see a battle for the GOP's soul?

Is the GOP the party of the white working class traditionalists, or a modern business-friendly party? Is it for crony capitalism where everyone gets a piece, or for small government?

This has been a big question ever since Reagan pretended that he was for small government, but never followed through. So many Republicans since then have winked and lied to the electorate about being for small guvmint, and the lie has taken root with conservative talk radio and the non-elites who think they are now the heart of the GOP.

Maybe we will see the answer to this question in the next few years. Some of the Tea Party types are again hopeful that they can overthrow the business/establishment GOP leaders, as Louie Gohmert challenges John Boehner for leadership in the House.

To most people, Louie Gohmert is the embarrassing fool who talks about the dangers of letting gays (with their strength-sapping sex-same massage techniques) in the military. He probably denies evolution, and doesn't think that we should have freedom of religion for non-Judeochristians. I don't know that Gohmert espouses these religious views, but it would be all of the same piece if he did.

Nonetheless, it's highly unlikely that Gohmert will prevail as he tries to win the speakership. The true conservatives will probably be thwarted by the establishment yet again.

The bigger contest will be for the 2016 GOP presidential nomination. Jeb Bush looks like he's going to run, and he isn't going to pretend to be more conservative than he is. He's sitting out an anti-immigrant conference (or at least that's the spin from the liberal MSM).

If Jeb Bush can blatantly run as a moderately conservative Republican and win the nomination, that will say a lot about the GOP. It will be a repudiation of the trope of 'true conservatism,' meaning the conservatism that desires to roll back almost everything since the 1960's. It would be a boon to rationality for this kind of conservatism to be defeated because this conservatism is chock-full of contradictions. They can't decide whether they are for or against Medicare, for or against Social Security. Many lie to themselves about how the government actually spends our tax dollars. They imagine that they are taxed heavily and benefit lightly while deadbeats make out like bandits. They refuse to see how they (or Granny) are actually the huge beneficiaries of taxation.

It would be great if Jeb Bush would run as a conservative who looks at the budget and tells the truth about it. It's good whenever any politician in any party does that. I don't know that Jeb Bush will do this, and I'm not counting on it, but maybe he'll get closer to this than any other GOP politician. And it could be that his wing of the party, including business people who regularly look at balance sheets, will be ready to hear that kind of message.

I keenly hope for this, but not because I believe in Jeb Bush or because I'm tired of the Dems. I hope for a heavyweight in either party who will run a campaign based on hard numbers instead of inflated hopes and vaguely sketched proposals. What would Americans do if someone confronted them with the truth? That would be a telling experience! 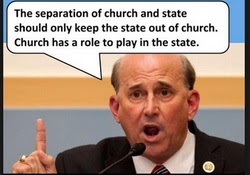 Update 1/7/15. I have to chuckle about how the conservative media caters to (or lies to) their audience. These guys don't have the numbers, but their media outlets never tell them that hard truth. Here's just one example:


"I am tired of all this big talk from all these people who keep losing. And losing. And losing. They talk this big game, but they still haven’t defunded Obamacare. They still haven’t gutted the Environmental Protection Agency or shut down the Education Department. Call me a bad loser, but it is well past time for these people to shut up all their talk and start winning."

Even in his rant against big talk, the author still doesn't acknowledge that the policies don't have the support at the ballot box.

Posted by ModeratePoli at 10:45 PM