Contrary to an abundance of evidence, Hillary Clinton isn't running for president, or at least she won't be running.

That's according to some hackish journalist writing for the conservative Washington Times. Let's see what he says: She doesn't have the fire in the belly. She doesn't want to spend her golden years working 16 hours a day and sleeping in unfamiliar beds. He theorizes that there's a "hard blue flame" that drives the winners, and declares Hillary doesn't have it.

Excuse me, but did George Bush (either of them) have a hard blue flame? No, they didn't. They were candidates of convenience. It's a bunch of bullshit to think tremendous, unabridged ambition is required to become president.

Of course the article correctly claims Hillary has a mountain of negatives. This is true, but it's also true of every other candidate for president. Their opponents dearly wish that these negatives would disqualify the hated candidate. But it just doesn't seem to happen.  From reading Bernstein, I know the qualifications you need to win a nomination, but there's no clear list of what 1) disqualifies candidates, or 2) ensures you win the general election.

It used to be that a divorced candidate couldn't win high office, yet Reagan disproved that. It used to be that no woman or black or hispanic could win, but that obviously isn't true anymore. People want to believe that no one with such-and-such a black mark can win the presidency, and then they conveniently fill in the disqualifying event. But it just isn't so. Probably every single president has at some point been declared disqualified, and those predictions were wrong, wrong, wrong. This is just a particularly stupid example of the genre. 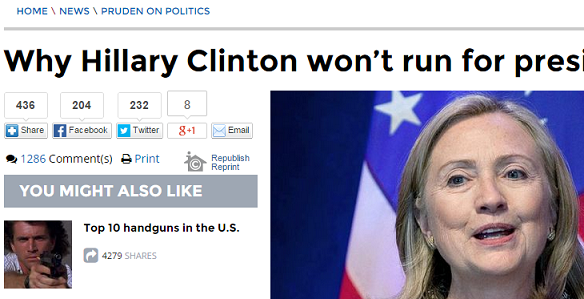 Posted by ModeratePoli at 3:29 PM

Well, if Hillary were to announce her candidacy early next week, it wouldn't set any record for the shortest time a Wesley Pruden column has been proven wrong.

@kylopod, do you know this guy? Luckily I don't. I just saw the headline and clicked through for a laugh.

No, I'd never heard of him until now. I just happened to have an inkling that if he wrote a column like this, he was probably among the conservatives confidently predicting a Romney victory in 2012. So I did a little Google search and quickly found my intuition confirmed.

@kylopod, yes, it's a parade of self-deception everywhere.

Some of it is self-deception, other times it is real deception. Jennifer Rubin basically admitted after the election that she was predicting a Romney victory in the hopes that saying it would boost his chances (by creating a self-fulfilling prophecy, I suppose). My suspicion is that Pruden falls into that category. This is the Washington Times we're talking about, his reasoning was patently absurd, and he actually cited with approval the esteemed Dick Morris (who had the distinction of making an electoral projection that was nearly a perfect mirror image of what happened--he predicted Romney would win 325-213 EVs; Obama ended up winning 332-206).