It's no surprise that John Boehner held on to his position as Speaker of the House, despite all the conservative media that seem to hate him. The conservative media and their zipperhead followers seemed to think Boehner was about to be overthrown. They unfortunately overlooked the reality that most of the country and the GOP isn't as right-wing as they are, and they are in fact a rather small minority.

However, in one way the Tea Party types are correct. No one seems to like John Boehner. Who is standing up and lauding him for his clarity of vision or great leadership?  In contrast, Nancy Pelosi is frequently praised by her caucus. This is a strange difference... so I must investigate, or at least cogitate and speculate.

Looking at this historically, it seems that the GOP wasn't enthralled with their last Speaker either. Denny Hastert wasn't a fiery Speaker either that many in the GOP seem to long for. The last Speaker who had some of that fire was Newt Gingrich. But unfortunately, Newt was also rather too blustery and egotistical, so he resigned when his leadership proved counterproductive.

So it seems that the GOP has been fated in the past two decades to never have a satisfying leader in the House. If they managed to elect another popular firebrand, he would probably cause too many headaches as Newt did. Most GOP representatives seem to know this, so they've elected more moderate leaders for their last two speakers.

These leaders might be taking on the Speaker's office as a favor to the party. They know they won't be popular, and that the conservative media will revile them, but someone has to sacrifice and take one for the team. That's what I think Boehner is doing. He has taken on a nearly impossible job, and will get no thanks for it. Maybe there are some perks that he really likes, such as tossing rebels off committees or perhaps assigning them tiny basement offices.

I'm afraid I can imagine all too well that it's satisfying to 1) keep your caucus from exploding, and 2) mete out petty punishments to the poorly behaved children in the caucus. Yikes! I might have the personality to be a GOP Speaker of the House. Quick, shoot me! 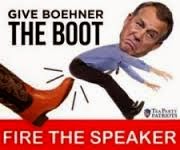 Posted by ModeratePoli at 3:41 PM