An unsettled argument about the Great Depression

What if the US owed its former marvelously robust middle class to anti-competitive regulations from Franklin Roosevelt? Would that make the heads of conservatives and libertarians explode? Well, folks, especially those from the aforementioned groups, that is a very strong possibility.

Lots of politically-minded people have reasons to try to tear down FDR's legacy. (I suppose a similar number have political reasons to bolster it. I'm not neutral, but, as always, I tend to bow to evidence.) A gem fell in the laps of anti-FDR folks in the form of a study from two UCLA economists claiming that some FDR policies slowed recovery from the Great Depression by seven years. Specifically:


"So he came up with a recovery package that would be unimaginable today, allowing businesses in every industry to collude without the threat of antitrust prosecution and workers to demand salaries about 25 percent above where they ought to have been, given market forces. The economy was poised for a beautiful recovery, but that recovery was stalled by these misguided policies."

Suppose you don't focus on the second half of that paragraph (the stalling of a 'beautiful recovery'), but instead focus on the policies that allowed businesses to collude as long as they paid their workers more.

Wow! This sounds like paying factory workers well. They can then afford to buy homes, let their children stay in school, enjoy occasional vacations, and generally live a decent life due to their decent wages. This also sounds like the American dream.

So there are all sorts of conservatives and libertarians beating up on FDR, but perhaps he was responsible for the well-paid, productive US factory workers who were the backbone of the halycon 1950's. When conservatives and libertarians say that we can have a much better, more productive economy, aren't they subliminally asking us to imagine the 50's? I think so. I don't think they're asking us to envision the periods when steel companies crushed strikes or when meatpacking companies cared little about the deaths of their workers.

What if the greatest period in US history is the product of the paternalist and socialist tendencies of FDR, and not the due to the vitality of American industries and the work ethic of their employees?

Well, if we're honest, no one thinks we can go back to the 1950's. We were the only industrialized country that hadn't been devastated by war, so we didn't have the international competition that we have today. We also have tapped out some of the resources we had back then, which is another reason we can't go back.

We can't go back to times that conservatives and libertarians consider 'better.' However, we can't use the same policies that FDR used either. Would we accept public works jobs that paid the present-day equivalent of $1 a day (as the WPA paid) and housed workers in dormitories? I can't imagine that we would. No, solutions to today's economic and employment problems aren't going to be found among New Dealers, or Austrian/libertarians, or nostalgic tea partyers, or staunch supply-siders.

. . . but maybe we'll try them all before we realize that. 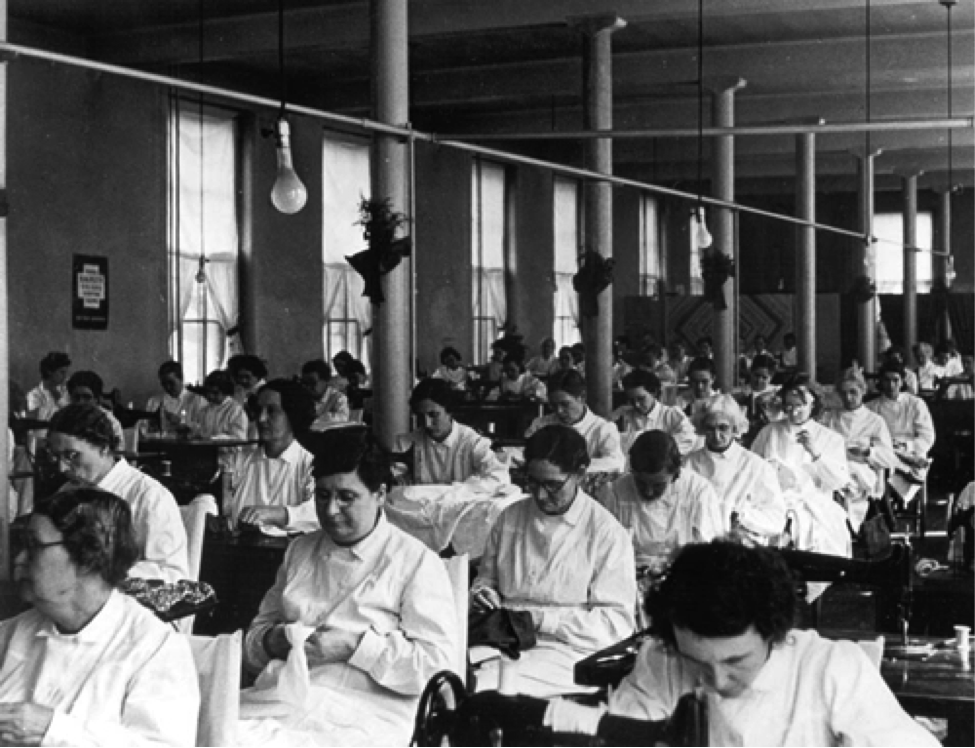 Extra. More revisionist history about the Depression that isn't quite accurate. A fascinating discussion of the monetary policy before and after the crash of 1929.

Update 2/20/17. Possibly some more evidence of this. From a fascinating article about how modern capitalism is about to face a huge pushback, here are two graphs showing how workers are losing their share of the economic pie while the rich are taking it: 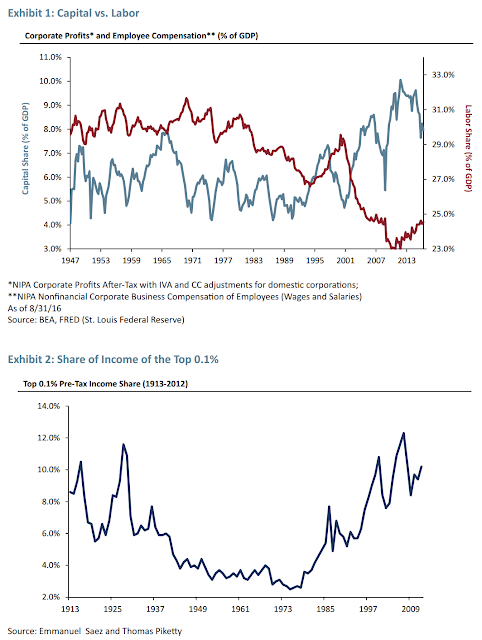 This isn't supposed to be a zero-sum situation. Supposedly, we can all get richer together, so it doesn't matter if the ultra rich become ultra richer. But maybe we're experiencing that it does matter.

Update 10/25/17. Some extra information. A graph showing income gain (or loss) over 6 decades. Yes, increases in income used to be shared more evenly across the spectrum than it is now. This article credits the Wagner Act of 1935 concerning collective bargaining for the increase in workers' wages.
Posted by ModeratePoli at 11:15 PM

The recovery stalled under Roosevelt in 1937 because FDR and the New Dealers got cold feet and stimulus spending. The rewriting of economic history during this period is to obfuscate more than to illuminate. For economic recovery during the period look to Germany under Hjalmar Schacht 1932-36 and his New Deal policies. Of course, Hitler fired Schacht and then took the recovering German economy and militarized it thereafter. But Germany, thru public works projects (autobane,..) reduced unemployment from 1933 (43.8%) to 1936 (12%). So there is little question concerning the success of Keynesian stimulus. It works when well thought out focusing on national public interest and full employment.

Should read, "NDers got cold feet and cut stimulus spending."

@yancey, Welcome to my blog. The issue about the downturn in 1937 isn't the point I'm trying to make. My point is that the controls that FDR supported may have been exactly what made the US the pleasant, prosperous place of our nostalgia.