Prior to the November 2014 election, I collected several articles on voter fraud, a topic I've discussed before. The usual spiel on voter fraud is 1) it's committed by the Democrats regularly (and is the only reason they win, according to some), 2) let's laugh at the zany claims made by those zany conservative hicks.

I don't want to do a piece that falls into either of these categories, but what's left? How about a sober evaluation of the claims? Here's what I found:

Local investigation in Florida of non-citizens voting. This seems like a level-headed initial investigation into real (not imagined) fraudulent voting by non-citizens. However, it leaves unanswered how these non-citizens ended up on the voter roles. Were they registered by default or by honest error when they obtained or renewed a driver's license? Were they registered in a voter drive by unscrupulous operators? Is the mistake and/or fraud different in many of the cases? We don't have those answers, and the non-citizens aren't shining much light on how this happened. The reporters aren't doing a good job either because they cite 100 possible cases, but not how wide an area they came from? Is it just one county, all of Florida, or what? Perhaps this isn't so much a real investigation as a bait for a particular segment of the audience.

Non-citizens voting in Virginia. This is skirmish in the voter fraud war. The Electoral Board did some research using juror records, and found approx. 300 possible non-citizens who were on the voter roles. They forwarded the information to the local prosecutor, but got no response.

Here are some others:

Do these cases change anything? No. The typical charges of 'massive voter fraud' originate with conservative talk radio demagogues, and these guys don't care about truth, evidence, or investigations. So we'll continue to hear these claims of voter fraud, and they'll be unchanged by the reality of minimal numbers. The only reason I bother to note this information is in preparation to refute the argument. Not that I'll convince any true believers, but sometimes I just want to get some truth out there. 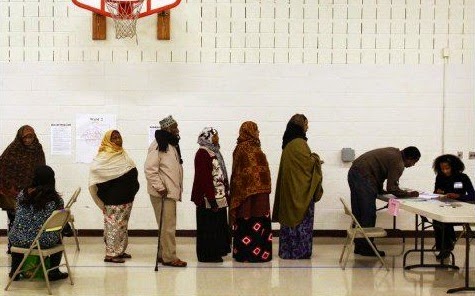 
Update 3/4/17. Here's a report from Ohio on one type of voter fraud--non-citizen voting. In 2017, that would be a staggering 82 of them. I guess the million of non-citizens voting for Clinton came from other states.

Posted by ModeratePoli at 3:39 PM