The theory that white southerners are still racist

The theory sounded plausible to me, and it has a lot of evidence behind it. I remember the southern strategy, the GOP talking points, the Lee Atwater quote that you can't say 'nigger, nigger, nigger' anymore. This post lists a lot more evidence, going era by era. However, the last data point is the Willie Horton ad of 1988. That's 26 years ago. Everything else in the post is interpolation:


"...they are the party where white racists are welcome, where 'Barack the Magic Negro' is funny, and people email each other photos of Obama with a bone through his nose..."

I doubt that overt white racists are welcome in the GOP. Overtly racist statements aren't. As for tasteless jokes spread by email, all political parties have that, I'm guessing. I prefer individual accountability (name and shame) to across-the-board generalizations.

It's very difficult for me to believe that all GOPers or even most harbor racist attitudes. The idea of the inherent superiority of the white race has been so discredited in these days of Barack Obama, Colin Powell, and Neil deGrasse Tyson. Who still believes it's correct to keep blacks in their place? Nobody I know.

So the question has moved to covert racism. Those charges are easy to make, and impossible to prove or disprove. So, what are some of these charges based on? In this post, the author talks about the assumption among southern whites that all other southern whites detest Obama, so it's completely safe to "blithely say hateful and racist stuff about Barack Obama" to any white southerner.

Is this racism, or is it dislike of Obama for political reasons? There are reasons in abundance for conservatives to detest Obama: huge deficits, spending tilted toward poverty programs ("dependence"), the blocking of budget cuts, creation of an expensive new federal health program, repudiation of activist foreign policy. support of marriage equality, etc. Why assume it's racism? If a person is generally saying racist things, then the assumption makes sense. Otherwise, though, you can apply Occam's razor and assume the dislike is due to differences over political policies. This approach also avoids virulent anger from GOPers who are labeled as racist, and very much resent it. Who doesn't resent unfair labeling? Not just blacks and liberals. 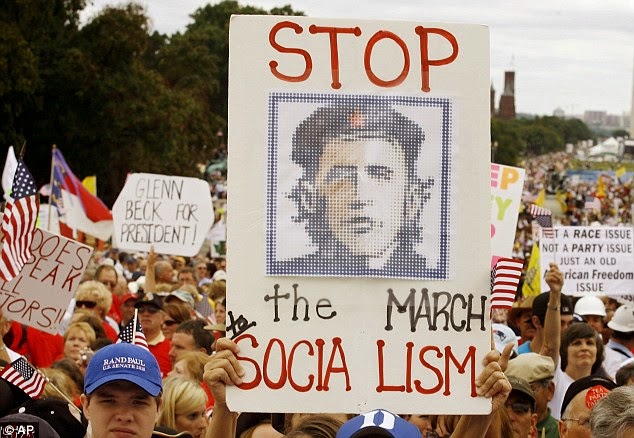 As for whites in southern states becoming almost all Republican, it's partly due to their gradual migration from traditionally being Democrats. It's also due to voters aligning with parties that reflect their principles. Southerners tend to be more conservative (and more evangelical), so it only makes sense for them to migrate to the GOP.

Update 1/13/15. A House GOP leader, Steve Scalise, spoke in 2002 to a group aligned with David Duke, a Louisiana white supremacist. Does that show Scalise is a racist, or just a conservative hunting for votes? Try proving it one way or the other.

Posted by ModeratePoli at 8:46 PM

Email ThisBlogThis!Share to TwitterShare to FacebookShare to Pinterest
Labels: prejudice

I live in Oklahoma, where people say blatantly racist things about Obama. The twist is, it isn't only Republicans here who say such things. Some Democrats do as well.

@Anon, I still have to wonder whether objections to Obama are due mostly to race or to differences in political opinions. It's the latter, I suspect, but please share your experience.

I have been called racist for my objections to the policies of Obama. My liberal antagonist in Joplin even wrote a blog "I Am Not a Racist", a statement I made recently when accused of such for my positions on Ferguson and NYC. He basically supported my claim by saying that I had never indicated a sentiment based on "white superiority", believing whites were "smarter" than other races.

The UVA "rape allegations" resulted in some women claiming, nationally, that "men hate women". Now some supporters of EIT in 2002, me included, are called "torturers".

Everyone can quote the famous statement by MLK, calling for his kids to be judged based only on character, but not race. I do that all the time, judge public figures based on policies called for, but not race. I support 100% Kings call, which, as I read it, says judging actions based on character is fine, but don't judge anyone based on color of skin, the melanine content of their bodies which has nothing to do with character within a body of anyone.

Of course, when attacked, to say "I am not a racist" is wrong. I could also say that I don't "beat my wife", which I don't do either. The correct statement when attacked at a personal level is to say nothing or at best "I do my best to be ....... (a "good" man).

How about a Tea Party accusation that I am not a "God fearing man". I would agree with them in that case however. That does not mean I don't "believe in God", It just means I have no fear of Him, a sacrelige (spl?) to many.

I am completing my re-read of Churchhill's History of the English Speaking People. I suppose some today in America would say that is a racist book!!

But the English never lynched just Negros. Instead the burned many English speaking people at the stake with no regard for race, creed or color, except perhaps the Irish after the English Civil War!!

One reinforces the other. While nearly everyone has their prejudices, sometimes based on learned behavior and sometimes based on personal experience, racist views held by many people who align with GOP policies are based on false premises, while the distrust of political institutions held by minorities is based largely on true premises.

A great example is views about crime. It's a widely held opinion that young black men are responsible for most of the crime in this country. This includes inner-city drug gangs and so forth. And, most people come to think, that's a serious problem that impacts their lives.

The truth is that financial crimes on Wall Street cost the typical American a lot more, impacts them from a distance whereas inner-city crime does not, and is more likely to kill them!! Yet, news and media and even fiction reinforce the fear of street crime far away from white people performed by black people. Yet similar stories (true or fictitious) of corporate malfeasance do nothing to make them demand (or support) greater resources to reducing so-called non-violent crimes. Why? Latent racist views are reinforced by selective attention or events -- a hallmark of the RIGHT's gestalt.

The irony is that BOTH white collar and inner-city crimes are noteworthy but rare exceptions. Consider the case of the exploding airbags. That little case of corporate malfeasance (or negligence) or one like it is more likely to kill someone than a stray bullet from a street crime encounter.

But the media somehow wants to equate the supposed political extremist of Ted Cruz (clearly motivated by racial animus, however carefully disguised) to Elizabeth Warren, who rightly sees far more danger to the country from Wall Street and corporate abuses that illegal immigrants.

@anson, Don't all societies have their prejudices? So I would guess, and the English of Churchill's day no different. I'm not sure they get credits for not lynching blacks. That would be giving credit for not murdering people, which we usually taken as standard among civilized folk.

Yes, I agree there's too much of calling people racist without good reason. I'm not surprised you've been called a racist for disagreeing with Obama. As I wrote, most of the time, I think these are political difference, but people have amped up the invective, so now it's all "racist" or "socialist" or "destroying America." I can't remember all the things I've been called because they are so ludicrous that I won't waste brain power remembering them.

@dangerous, I agree that political disagreement reinforces racism, but how about when there isn't any racism to reinforce. Is all disagreement with liberal tenets racism? If so, I'm a racist too then, though I don't think so. When I disagree with my black neighbor, does that make me a racist? I hope not.

The perception of cultural problems is all too likely to reinforce racism. If there was zero basis in fact, generalizations used in racism what die very quickly. You're right that selective attention is used to reinforce prejudices. However, you're wrong to label it a gestalt of the right. Lots of people practice it. Lots of liberals have selective attention, but they filter out things like cost/benefit analysis or that many people will take the path of least resistance (including staying on welfare generation after generation).

You also demonstrate exactly what I wrote about when you wrote this: "...Ted Cruz (clearly motivated by racial animus, however carefully disguised)..." Just how do you know and how do you demonstrate that he's motivated by racial animus? I bet he hates Nancy Pelosi as much as he hates Obama. Don't the political differences drive him much more than anything else? Yes or no?

When a person refers to Obama as "that nigger", as they have done in Oklahoma is my hearing and in the hearing of trusted informants, I feel I can safely infer the person is racist. Whether the person's animus against Obama was motivated more by politics than racism seems like hair-splitting at that point.

@Anon, thanks for returning and sharing more info. I'm not surprised that some people are still racist, and calling Obama "that nigger" is definitely racist. I know this is true because there's a very active set of white supremacists on the web, commenters writing "white countries for white people," etc.

Essentially you are saying that people can be racist without even knowing they are such. I have been accused of just that simply becaused I was raised (40's and 50's) in a segregated community (until my freshman year in HS, 1956). I disagree.

Joplin is decidedly a blue collar small city in the Midwest and votes overwhelmingly GOP in every election. Local liberals call Joplin itself a racist community. I disagree but of course in early Tea Party rallies I saw a FEW signs containing the "n..." word.

I worked HARD, all my adult life, to treat people based only on their character, their performance if you will. But judge them in any work place based on PERFORMANCE, you bet I did that all my adult life and even now.

Cruz and Warren, as far as I am concerned are both nuts, politically. But I refuse to call either one a racist or a communist either.

Warren (and you?) believes the root of evil in America is Wall Street, or even capitalism perhaps. Cruz believes that people that fail to work hard and accept handouts to live in relative comfort is the issue. Well which is worse for America, a fat cat banker cheating customers or a "no load" standing around asking for hand outs from others all the time?

Would even you agree that both examples do harm to America and remedies are needed in both cases?

Maybe the best solution would be to lock up Cruz and Warren in a small closet and not allow them out until they compromised on both issues, using biparisan legislation!!!