The high stakes of culture: Mississippi

I continue to see the effects of culture almost everywhere. I listen for cultural differences, and the effect of culture on values and the choices that people make.

So I thought this was a very striking observation by Jamelle Bouie, a black political columnist:


"White supremacy built a politics of racist antagonism. Blacks were substandard people & thus received substandard schools, services, & law. Anything public had to be kept separate from blacks, and if that wasn’t possible, it had to be degraded..."

Further down in the same post, the author links to a tragic story of what happened to ACA in Mississippi. It's a worthy of Shakespearean treatment. There are the heroes who try to step above the usual bitterness, and the banal villains who shred those attempts and congratulate themselves while doing it.

I'm a northerner and  hardly know about the south. But when I read these kinds of stories, and consider what I do know about the south and about Arizona (settled by southerners, and where my parents now live), I start to see the patterns that Bouie writes about. Why do northern states spend more on education than southern states? Entrenched racism and the resulting antipathy to public services could be the answer. What a sad answer that is. And is it just a 'neutral' cultural difference, or is it actually a inferior culture that should change? I can't be a fair advocate for southern culture, but I'll keep my ears open for such an advocate. 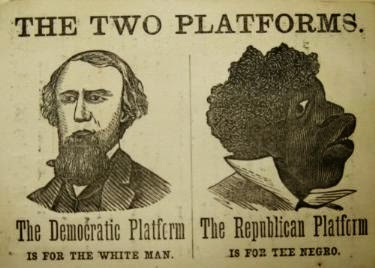 Posted by ModeratePoli at 7:28 PM

You hit the nail on the head, MP. I'm glad you have your eyes open.

The us vs. them attitude is ingrained early and nearly impossible for most people to shake. You might as well expect a Patriots fan to decide to root for the Jets.

More-for-you-means-less-for-me thinking is also prevalent which accounts for empowered support for the mechanisms that keep it that way. It's interesting, but the ONLY national election in which the Democrats won the south with a mix of black and write voters was JFK in 1960. Carter -- from Georgia -- won quite a few southern states, but that was mostly with overwhelming African-American support, along with a regional charm to get enough of the white vote.