In 2012, the Dems were the lucky ones. The GOP had been having their equivalent of the Cultural Revolution for 3 years. RINOs were denouncing themselves and going to reeducation camp, where they were swearing to close the deficit with tax cuts only. Some of the nuttier ones were saying that we must go cold-turkey on deficit spending--cutting budgets immediately and deeply.

In that situation, all the Dems had to do was not be crazy: Don't have a hundred new, expansive proposals. Acknowledge that you have to work with the GOP-led House, so there are going to be limits on what you can do. The Dems were able to avoid crazy, so they won.

In 2016, the Dems might be running against sane opponents, so it's going to be much harder for them. The sane crop of candidates in 2014 didn't push the idea that all pregnancies are sacred (so no abortion even in the case of rape or severe deformity) They didn't say the government should be shut down if we don't get our repeal of Obamacare. Actually, I assume they didn't do this. I didn't see their TV commercials. But I didn't see over-the-top commercials critiqued or lampooned either.

So if the 2016 GOP candidates aren't going to be crazy, how will the Dems win? That's a question they should be asking themselves. If the Dems don't want to lose in 2016 the way they just lost, they will have to come up with a damn good answer to that question. I'll be looking for how that shapes up. 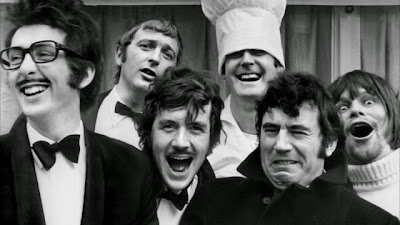 It was easy to beat this bunch.
Image: filmschoolrejects.com
Posted by ModeratePoli at 4:25 PM

If we want to be "super" internationally and at home, we again must earn it not financial gimmicks that reflect wealth that can evaporate in one small "panic".

From 1776 until the turn of the 20th Century, America settled a continent, one slow step at a time and earned that ultimate goal. We did not borrow enough money to do so, we just did so on our own so to speak.

We had two major wars during that time and borrowed money to fight them. We repaid that debt and continued to settle a continent.

But in the 20th Century America decided to "settle the world" or at least the European part of it. We borrowed money to do so and never paid it back.

America cannot decide how to spend the money available, from Americans. The constant cry, scream if you will, is we NEED more money, for everything. No one has the political courage to say NO.

Just look at all the democracies in the world today, America and Western Europe by and large. Both are enduring slow economic decline and fail to earn all the money to do all they want to do today.

Keep that up long enough and the inevitable will come to pass, economic disaster caused by spending more and more and earning less and less, until .......

@Anson, I agree that people don't have the courage to say NO. It's not just politicians, it's also the electorate. Actually, they're happy to say No to 'others' and their requests, but they aren't willing to say No to themselves. Just look at how people are vilified over any attempt at cost containment in Medicare. The same is true for cutting, say, food stamps, the military, schools, etc.