The Democrats may be on the cusp of being exiled in the wilderness for another period like the 70's and 80's, due to their leadership and money machine being too liberal/progressive. They've lost a lot of popularity between 2008 and now, but they are behaving like it's 'not their problem,' but a problem with midterm electorates. Maybe this is true, but it's a big gamble with 2016 coming up. Look at this popularity graph: 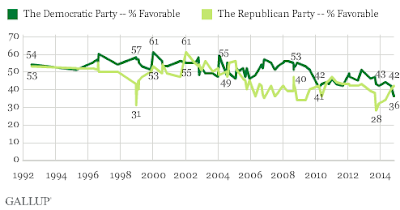 Popularity of the GOP has been going up in the past year, while the Dems' popularity has dropped. Isn't it time for the Dems to try reversing that trend?

Deborah Wasserman Schultz, the first Dem to address the problem, says that it's not the policies that have to change. She's ordering a post-mortem with changes to be announced early next year. These reporters (obviously biased toward progressives) seem to think that only progressives Dems support a higher minimal wage and reform of overly long criminal sentences. And since these measures are popular, Dems need more progressives. I say that they're looking at a very skewed picture there. Lots or all Dems support those measures, not just progressives. Mistaken assumptions lead to mistaken conclusions.

If the progressives get their way, and the Dems become even more progressive, they don't have a bright future ahead in 2016. But maybe they'll have to run the experiment and find out (because the whole of the 1970's wasn't enough). It will only cost them... the presidency. No big deal.

Posted by ModeratePoli at 7:28 PM

I sincerely hope this blog allows "dangerous" and I to continue to get to know each other better.

In any country, particularly any democratic country, there is a political spectrum. It goes from say -10 to +10 with one side being "Liberal" and the other "Conservative". But even those definitions change over time. Hell Lincoln, a Repubican, was very much a liberal in many ways. So be careful with terms as such definitions or terms are time dependent.

But stick to right now in America. there are liberals ranging from -10 to 0 and conservatives from 0 to +10. Note I did not say Dem or GOPers. I am around +3 or so using my metric offered. I consider myself, politically an independent however. I do vote Dem from time to time when "+" choices are just "nuts" in my view. "Nuts" being an 8 or so in either direction.

There is an interesting book delving into the reasons why people wind up "+" or "-" on my scale, offered. Is it biology, culture, enviroment, psychology, etc., etc. Or is it just "thinking", reading, using one's logic (good or bad) that puts us where we are, politically? The book of course says it is a combination of such things, which is little help in my view.

Dangerous is Ivy League educated. Is that an "automatic" liberal? I was Naval Academy educated and served for 23 years in the Navy. "Automatic" conservative, or is there more to both of us? I like to think so as I now find myself, while still "+" I am a helluv lot less "+" than during my "younger years"!!

But all this is background thinking by me to address the issue of where is the American public now, on the scale suggested. Who knows? No one knows for sure as it is a constantly moving target which is very hard to measure, polls be damned. All polls are very much time dependent, day to day swings in many cases.

I do know this however. Democratic policies actually placed into law since 2008 are not very "popular" right now. More important the day to day "governance" by a Dem Administration is very unpopular with Americans. Too many glaring mistakes have been seen, IRS, Benghazi, continued turmoil in the Middle East, and the list goes on.

Denying those mistakes by politicians (Why worry about that now!!) is wrong. And explaining obvious mistakes with an eye to how they will be corrected is a sluggish mess coming from the Obama Administration as well.

I for example view Benghazi as a terrible example of how the National Command Authority reacted to a crisis. That is apolitical as I believe most NCAs today will try to react politically rather than rationally based on fast changing facts on the ground.

Obama no more knew the "video made them do it" than I did. Yet he stepped out to "make that excuse" and got creamed when he did. He should have been so creamed with such an idiotic pronouncement, be he Dem of GOP, in my view.

But I will say this, Dangerous. Right now I have no idea if I will vote for a Dem or GOPer come 2016. And all the mucky te muck policy crap will not sway my vote.

This country is crying for LEADERSHIP, someone that will unite America. In 2012 I voted for Romney for just that reason, leadership potential vs what I saw as a failure of leadership, forget the policies, on the part of Obama.

On that point alone I am at 10, + or - making no difference whatsoever to me right now. I think a lot of Americans feel the same way.

PS In terms of leadership Moderate, neither you nor I nor dangerous has any idea how the new Congress will LEAD, not just politic themselves to death!! We have to see it first. But if you want my guess right now, well we are still in big trouble for the next 2 years, in my humble opinion.