Japan has been mired in recession for maybe two decades now. The government has tried to spend its way out with major infrastructure stimulus, but to no avail. It's ironic, but perhaps this comment is the best diagnosis that I've read:

It's not surprising if Europe is facing this. Maybe the US is facing it too, but not yet. Maybe most countries will be facing it in time.

However, this isn't the worst thing that could happen--that growth slows to a pittance and we end up in a steady state. Endless population growth and population pressure seem much more frightening to me. But perhaps that's just a prejudice of mine--preferring a leveling off or decline in population to increasing population.  However, I think it's more than just a preference. I have to wonder whether the Japanese are suffering from their population and productivity decline, and compare that with places where overpopulation is a problem. When I look at Japan versus Bangladesh, Pakistan, the Philippines, Nigeria, and others, I see much less suffering in Japan. In countries with high population growth, I see a lot of current suffering and a bleak future.

Instead of fearing slowing growth, we should be figuring out how to manage it for the best outcome possible. But even without the best management, we're better off than if we were among the 40% (and growing) number of unemployed in Kenya. 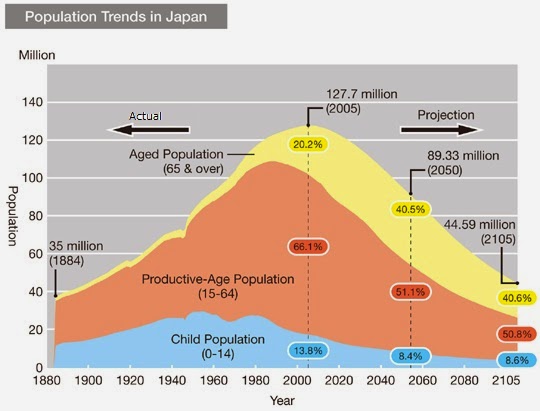 Posted by ModeratePoli at 1:23 AM

If your thoughts are correct, the correlation of population growth and aging population to economic well-being, consider the effects of China's encouragement of abortion and the "only one child" ideas around for a long time, in China.

China is "suffering" economic consternation right now because its growth in GDP is "only" 7.5%. Obama, et al, would "kill" to have such growth right now!!

Up until the 20th Century an aging population was never an option due to medical science lacking the ability to keep lots of people alive. But now ...... and given current thinking it will be a cold day in Hell before "Death with dignity" (assisted suicide) becomes the law of the whole land in America.

In America we support an aging population, use tax dollars to keep people alive no matter what, to the limits of science's capabilities. To do that we NEED a population that works to keep the money available. But we don't demand that people work, or else, and even pay them money when they don't work, no matter what.

To keep that economic engine running we need much higher productivity on the part of people working and paying taxes. Yet 47% don't pay taxes at least to support the federal government.

How long will that last?

As well how can America continue to increase productivity with a disfunctional system of public education?

@anson, the biggest problem in the US is not the lack of people to work, but the lack of jobs. We have a lot of unemployed or underemployed people who would like to work (or work more) but can't find a suitable job. We have people who are not as hard or reliable workers, and immigrants have taken those less desirable jobs. In what part of the picture is education really lacking? That kind of unfilled job I hear about is for skilled, experienced machinists, etc., not entry level jobs.

As for the trope that 47% don't pay income taxes--it's important to look at the reasons for the the numbers. We have an aging population with lots of retired people. We also have tax credits for low-wage workers to help them get by. I personally support not taxing these groups (low income seniors, low-wage workers). If you don't agree, please indicate which group you want to tax.

I am old, on a fixed income (about 95% of it at least) and pay taxes, federal income taxes each year. My wife an I paid $1400 this year for public schools, alone, as well. That is a low amount in comparison to many other states but it still "hurts" to write that check. All told I pay about 25% of my "income" in taxes and for sure am not part of the 47%.

As for the number of jobs available, I challenge that asseration that they are not available. It is simply that enough higher paying jobs are not available due to lack of education and experience for many workers, potential workers. I see it all around me, almost every day when I attend various events in town. Go to any AA meeting, anywhere in America and see the unemployed. Then look very carefully at why they are unemployed and the money they receive from others for a long time.

But look on the bright side of such stories as well. IF, when if you like, they follow a "simple program" they find themselves able to live again as productive citizens taking care of themselves and others as well. The choice to do so rests with them alone however, ultimately.

My own community endured devastation three years ago. A "grand plan" for recovery, turning Joplin into something it never was before the tornado, was undertaken.

Well Joplin is not going to achieve anything close to such goals, great goals, now, in my view. Joplin is going to be a stagnate, blue collar town in "fly over" country. Before the storm it was "who would want to live in Joplin".

Despite tons of government money, with unbelievable strings attached to it, voluteers galore, etc., Joplin is going to be what Joplin was before the storm with only a few exceptions in my view.

Why is that I wonder?