My bias regarding police

I tend to be biased toward believing a police officer's account in a controversy. However that doesn't mean my bias is rigid--I absolutely know that there are rotten, lying, prejudiced cops who shouldn't be believed. So I make sure to be alert to inconsistencies in a cop's story.

I got to observe my bias at work with the Ferguson shooting. My guesses about what had happened went back and forth, showing the interplay of my biases and the weight of evidence. Here's the account of how my thinking evolved.

At first, the witness's story seemed logical and consistent. A cop got pissed off at the two young men, provoked an argument, grabbed one of them, and then shot him dead. It's certainly possible.

However, this witness (Dorian Johnson) was soon discredited. Video showed that he and Michael Brown were at a store where they allegedly stole some cigars and Brown pushed and intimidated a clerk. From the video, you can't tell either the cigars were stolen or not, but the pushing and lunging are clear enough.

Also, in the meantime, the cop's background was reported as being clean--no prior issues with excessive force. A clean record isn't what I'd expect from a cop who had a bad enough temper to shoot an innocent person on purpose. But a record can be misleading. Perhaps the cop had always managed to avoid disciplinary measures while still being aggressive. This 'fact' is not as convincing as the video.

At this point, my usual bias toward believing the cop was supported by evidence, or it seemed that way to me. I was still gathering information and evaluating the testimony of the witnesses who went public. I was waiting for photos showing any wounds the cop (Darren Wilson) might have received. I was also waiting to hear what the autopsy showed. This evidence took a long time to arrive and is still subject to dispute. The conclusions of the county medical examiner don't completely match the conclusion of the medical examiner hired by Brown's family.

So did the 'facts' depart from what I expected at all? Yes, and that's where I learned something new. The people of Ferguson had a particular reason to be angry. They were being plagued with punitive fines and enforcement aimed at extracting as much money as possible (more details here).

Of course, the burden of excessive fines doesn't excuse theft or assaulting an officer, but it explains some of the response. Nonetheless, most of the response is due to bigger issues such as the history of police aggression against minorities and cultural clashes between law enforcement and a 'no-snitching' ethos in black communities. I wish there was a giant reset button we could push that would erase the historical animosity and let people start fresh. But there isn't, so we are doomed to reinforce our biases unless we actively work against them. 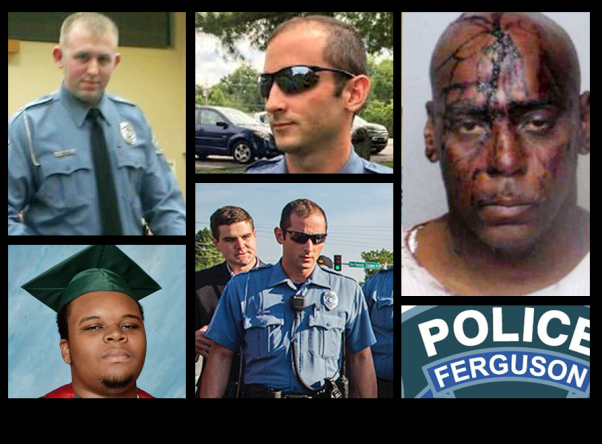 
Update 12/8/14. I recant what I said about the 'giant reset button.' That disrespects the legitimate and deeply-felt grievances minorities have. There is no wiping the slate clean. Instead, there should be amends, trust-building, and reconciliation.
Posted by ModeratePoli at 7:29 PM

We all have ingrained biases of one sort or another. The solution is to be honest enough with yourself to recognize what your "gut reactions" might be and don't allow such reactions to establish a firm position on a given issue.

Simply said, all of us must work hard to not allow emotions to drive our politics, to the extent anyone can do so. Instead, calm down, think and read hard about a matter and let logic overcome "intuition".

Could the two cops (Ferguson and NYC) have been black hating, vengeful cops on a mission to harrass only blacks? Sure they could have been just that.

Could Brown and Garner have been cop hating felons with a long history of violence towards both citizens and cops. Sure they could have been exactly that as well.

In each case it boils down to what was in the mind of both the cops and the two men, now dead because of force applied by police.

About a millenia ago English society decided that judging the actions of people in legal matters should be left up to other citizens alone, juries. That is the basis of our criminal justice system today, citizens must ultimately judge other citizens. No judge, lawyer, protest group, advocates on one side or another has the authority and responsibility to render such final judgment other than juries in the vast majority of the cases.

We are NOT a country of trial by popular opinion, the media, even judges and lawyers. The final decision in criminal matters related to right or wrong is up to juries. All others advocate freely but do NOT have the authority to render final judgment.

I have no idea what verdict I would have rendered had I been on either grand jury. I would have needed to sit for however long it took to hear all the evidence, then go into a private room with only my peers on those juries and make a decision, first for myself and then working with others to reach a final decision, unanimously or majority rule as the case may be.

Now I neither condemn or support the decisions of two grand juries. I merely accept those decisions and assume 37 (23 and 14 respectively) honest and unbiased citizens did their jobs and rendered a judgment. Acceptance is not an endorsement of a decision. It merely says I endorse the process and believe the judgment reached was done by honest and unbiased citizens, the whole basis of our system of Justice.

Had the two recent grand juries or the earlier Zimmerman/Martin jury made decisions opposite from those judgments rendered I would have accepted those decisions as well.

Now after the judgment is rendered by honest men and women doing a very difficult job as citizens and more evidence is provided to show jury tampering, prosecutorial misconduct, etc., etc. well make such charges within our system of justice and prove the allegations before a different jury. I will sit quietly to see if that comes about as well and accept whatever judgment a different jury makes against different charges against different people.

Every citizen is assumed to be innocent until proven, before a jury, guilty. Like it or not, the actions of two cops were shown to not even be to a level of wrong that charges should be brought to a criminal trial and two JURIES made those two unpopular decisions.

To reject that decision as wrong implies a rejection of a jury system of justice, it seems to me.

Would you and me have come to a different decision had we, together, been members of either of those juries? I submit we would have had to been there, done that for 5 months together to answer that question.

@anson, that was beautifully written and a good reminder. English common law is a priceless legacy for us (and the rest of the world).

I almost always accept the word of juries as being superior and better-informed than my opinion because they have viewed all the evidence and heard the testimony. I certainly hope that they've been honest in their decision-making and have set aside their biases as much as possible.

I wonder--did you think I was disagreeing with either grand jury? I certainly didn't mean to convey that impression.

Your words implied, at least, a concern, even disagreement with the outcome of the two grand juries. Many honest Americans feel that way and are now seeking better ways to ensure equality of justice.

I am not at all afraid or reluctant to hold that discussion, how to better apply the law equally to all citizens. But in these two cases I suggest the system did what it was designed to do. A question of right or wrong was placed before a jury and two juries made a decision. So who or what is to blame if the decision was unpopular?

Unusual for a grand jury, the two cops told their stories along with a large number of other witnesses. Usually no defense testimony is offered as defendants know full well the grand jury is "rigged" against them. They hold their cards closely and await a criminal trial to exonerate themselves. But in this case they showed their cards, their side of the story and a jury seemes to have believed them, along with other supporting evidence, forensic evidence, along with strongly conflicting evidence from the "prosecution side" of events.

If anyone believes the jury was biased, bigoted, unfair, etc. well show me why you feel that way but don't just use headlines or one two minute video to make your case. I need more information.

If you believe prosecutorial misconduct was involved, then call for a full investigation on that matter. But don't try to retry the case against the cops simply because you don't like the decision of a jury or two.

Juries, only juries in most criminal cases have the responsibility and thus authority to render such judgments, period. I would not change that process in any way based on these two cases.

I also do NOT believe these are cases related to racial animus. I believe the issue is possible overuse of force by two local police departments, one being the largest, most diverse and best trained police department in America. The mother and daughter of Garner are now saying exactly that it seems as well.

Regulating police use of force should be the issue, not racism on the part of police, unless it is proven as such in a court of law.

@anson, I'm not sure how you got the impression that I disagree with the grand juries. For one thing, I explicitly agree with the Ferguson grand jury in this post. In the Eric Garner case, I'm more ambivalent and less informed, so my opinions are more tentative. However, it seems fairly clear that the police and EMTs failed to respond appropriately to the medical situation.

The point of this post was to demonstrate my biases in reviewing such issues. By extension, it was a reminder that almost all people have their own biases too.