Caring to the bitter end

I just realized something that seems obvious in retrospect.

I already knew that I was more tenacious in arguments than many. I also knew that I more interested in using argument and inquiry to undercover truth. Of course, I also knew that most commenters on the internet have neither the vigor nor the fairness to follow through on the paths their arguments take. Yet knowing all this, for the first time I attacked another commenter for pivoting away from an argument, and called him to come back to it. This is what I wrote (minus the fake expletives):


Why won't you stay on the topic, thrash it out completely, and find out if you're right or wrong. It's so maddening to argue with some people. If you really care about the issue, stay to the end and really go into the argument, don't bail out.

This is what I really think. If you care about an issue, you go as deep as you can. You keep arguing, and keep listening to all the counterarguments, until you figure out what is strong and what is weak, what is right and what is wrong. The real answers are worth doing this for. If you don't want to go this far, and don't want to make the commitment to following where the arguments lead, you shouldn't be arguing at all.

If, on the other hand, you really care, then you do follow the argument to the end. And sometimes the end is painful. I find I've been wrong for years, or that the world can't be the way I wish it could be.

I know that some of this sounds like self-congratulations, but I think it's more than that. It's a commitment to rigorous thinking, rigorous inquiry, honesty, and acceptance of the truth that's discovered. That's a big commitment, but I mean every bit of it. 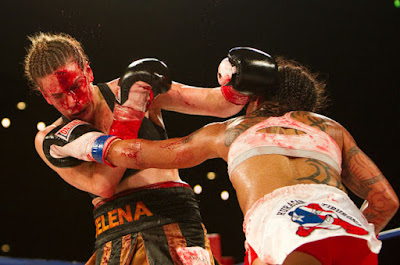 Posted by ModeratePoli at 11:42 PM

I've always said there's no sense arguing with idiots, so I'm surprised that you're just finding out now that most people argue based on opinions rather than facts or careful analysis. They argue to persuade and to tamp down their cognitive dissonance, like Trump supporters who feel like they are the victims of political correctness when it is only that which keeps us from calling them out for what they really are: racists.

Okay, not all of them are racists at heart, but their willingness to support someone who appeals to racial animus or distrust, with just thinly veiled language of hate, are doing business with racists. That makes them just as culpable in my opinion, and that opinion of who they choose to support is just as valid as their opinions of why they would support someone like Trump -- a proven fraud and egomaniac.

At the root of nearly every Trump supporter's anger are negative emotions, not some claim to social justice. They view others success of even achievement of civil or human rights as taking something from them which is their birthright. This may be a harsh and generalization you might say, but I too am tired of being politically correct by giving them the benefit of the doubt on their words. As you say, they do NOT analyze their weak-ass arguments all the way to their logical conclusion. That's hard work and people don't like the hard work of self cross-examination.

I counter argue that Obama faced recalcitrant opposition from his political opponents who set out to destroy his presidency from day one, just to try to regain control of the White House for their party. I have copious evidence for that in their own words, they votes in Congress, and they concerted effort to denigrate every achievement of this Administration. Nope. Their opinion is what matters.

And that goes for his supporters who root him on. I know the cards they are holding and they are even weaker. They hate Obama for reasons they will only share when they know it's safe to show their cards. But I don't have to see their cards to be sure. Given the facts as they stand now, and as they stood when Obama took office, if it had been their guy (or gal) in the White House, they be bragging what a great president we have.

@dangerous, what's got into me? Maybe I'm learning what I appreciate most in my hard slog to figure this all out. I didn't say anything that I didn't know before--you didn't say anything either. But somehow there is a shift, a sense of the enhanced significance. If this turns out to be the biggest struggle in my life, I want to be ready for it and commit to it.

I hope it doesn't go that way. I want a clear majority of the US to be against Trump, so he's easily defeated and disgraced. We shall see.

(By the way, this post wasn't just about Trump. It's more about the hard fight to find the truth of difficult questions. Trump and his supporters are involved because they are the biggest impediments to truth at this time.)