I guess no one but fevered corners of the media want a repeat of Charlottesville. A couple weeks ago, White Lives Matter rallies in Tennessee were pretty much a bust, thank God. This week, a pop-up anti-fascist organization called Refuse Fascism was trying to stage rallies in 20 cities. Note that it wasn't even antifa.

They took out a large ad in the New York Times announcing the plan. That's interesting because 1) they had the money, and 2) they decided to announce just a few days before the rallies. I wonder whether this is a real group or not. I wonder who financed it.

Parts of the conservative media lost their shit. (Yes, the term applies so I'm using it.) Most of all was InfoWars. They were going to have live coverage of the rallies, hoping to show all the carnage. Or maybe hoping for a (relative) advertising bonanza.

Because carnage didn't materialize, they went to Plan B. Hype what was available. Oh My God, they're calling for the ouster of Trump and Pence. And also, laugh at the puny Austin, Texas rally where the anti-Trumpists were outnumbered by real Texans. So hype and then declare victory when the rallies don't live up to the hype.

Despite the concerns, revolution didn't break out anywhere. Somehow I'm not surprised. 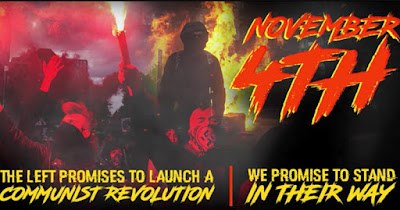 Extras. Two articles about the smallish white supremacists rallies in Tennessee. A British site joined the hype-and-dismiss crowd. The Washington Post had a round-up of some of the hysteria. Fox News is coy, asked questions rather than doing any searching. It also gave a platform to the spokesman for the group but didn't question his credibility at all.
Posted by ModeratePoli at 11:45 PM