This is an explanation I developed in my comments on political threads, but I'm finally writing it here. On many issues, the GOP leadership has the choice of two negotiation partners. It can negotiate with the House Freedom Caucus (a more conservative group) or it can negotiate with Dems.

Both the Freedom Caucus and the Dems will try to barter votes for concessions. The GOP will be able to play them off against each other and lower the degree of concessions.

This dynamic was first apparent when the GOP were late again getting to the appropriations bills last September. Dems helped them out by providing votes to pass a clean continuing resolution to keep funding as is. In December, it was the Freedom Caucus' turn to provide the votes, with a clean bill again being passed.

Neither the Dems nor the Freedom Caucus gain much in these clean bills. Many of them want to use their leverage (their votes) to gain concessions. Dems want protection for DACA young people (children brought to the US as illegal aliens). The Freedom Caucus has a big roster of wants, including no concessions on DACA, tougher immigration measures, and more military readiness.

With the 1/19/18 appropriation deadline coming up, both the Dems and the Freedom Caucus were vying to be the partner. The Dems thought they had a deal, but it fell apart. The Freedom Caucus swooped in and made a deal for almost a clean bill--few demands at all. That bill passed the House just one day before the deadline.

The Freedom Caucus agenda is a better fit in general for the GOP. But this is complicated by the slim GOP margin in the Senate, and some very independently-minded GOP senators. Several senators, such as Lindsay Graham and Jeff Flake, want to do an immigration reform deal that is more liberal than what the rest of the GOP senators want. (This is how the Dem deal fell apart. The Dems negotiated only with Lindsay Graham, and the deal was spiked by Trump.) Do Graham and Flake have to willpower to stand strong and send the Freedom Caucus deal to defeat? I rather doubt it.

I think Graham and Flake will have to settle on a lesser immigration deal in the near future, or maybe no deal at all. Democrats have been threatening a filibuster and hinting at a government shutdown if they don't get a deal on DACA. I predict any shutdown will fail. The Dem leadership probably realizes this, so I don't think they would attempt anything more than a token shutdown at most.

Shutdown threats are a blunt instrument, and not useful for getting major changes in potential legislation. Making an advantageous deal is going to be hard for the Freedom Caucus or the Dems. The best deal may be for them have secret talks with as many allies in the GOP establishment as possible, be prepared to make concessions, and then take what they can get. However, this strategy is certain to piss off true believers among the supporters, and get the politicians labeled as sell-outs. But that's the breaks when you negotiate from a position of weakness and you aren't the only potential partner. If someone is ready to trip you and underbid you, you need to be ready to do the same. 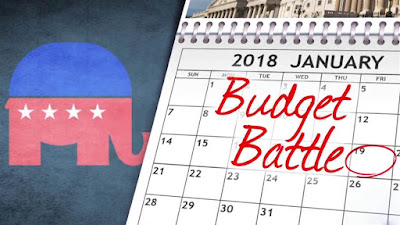 Posted by ModeratePoli at 11:38 PM

I'm reading this well after you posted it, MP, but the same analysis can apply to the Feb 4 deadline and I generally agree. I think the difference is that the Ds can threaten to shut down the government and make the Rs take the blame, while the Rs can't but can play the blame game better than the Ds, at least in the media if not with the voters.

There's not really any negotiating going on since nobody involved can make promises they know for sure will matter and that other parties on which they rely will go along. The House has it easy for their part; they don't need a super-majority so their internal negotiations mean nothing. Either the Ds or the FCs can provide the margin for passing legislation, but neither can get what they want through the Senate so they don't even count. And while Trump would probably sign anything passing Congress, he can thwart anything just by saying the word and getting McConnell or Ryan to renege on promises or just not bring something to a vote.

All that matters is politics at this point and whoever can message to political advantage will prevail. At this point, nobody has messaging to match what the voters think -- or at least what a majority think -- that isn't subject to whataboutism and all the other water muddying tactics counter-messaging can generate. A vast majority of voters support the humanist view of Dreamers and want DACA protections for them or more, but unless it touches them personally they have a general distrust/dislike for those "others" and also think it should stop in the future.

I predict another shutdown with a D victory if they message correctly on DACA. The Rs are in a weak position since they say they want to help Dreamers but created the current impasse, and the vast majority of voters agree with the D position of unconditional Dreamer protection. The same large majority doesn't exist for Dreamer citizenship, however, which is why Trump offered that in order to get his less popular immigration changes that only his base and right-wing Rs care about.

So the Ds can message that they are standing with the majority for unconditional DACA protection and are simply holding the Rs to their word on it, and make the Rs explain (and when you're explaining you're losing) on why they are holding Dreamers hostage on something they supposedly support. The Rs will howl and blame the Ds, but the Ds can just repeat again and again that they won't vote for R priorities until they keep their word on DACA.