House Republican Devin Nunes, who did some underhanded shit to cover up for Trump last spring, now has a new plan. He's claiming that he has secret information that shows how the FBI and maybe Justice Department (DOJ) had conspired to illegally surveille on the Trump campaign, and other such nefarious acts.

It's a bunch of hogwash. Nunes doesn't have new information -- that's my prediction. He has a hodge-podge that he's carefully piled up to make the FBI look as bad as possible, mostly by editing out info that shows the FBI doing their job, while playing up anything that makes them look bad.

I have no inside info at all, so my prediction of the contents of the memo are based on existing leaked information that is all over the press. Both the Washington Post (link above) and Reuters have detailed stories about what is in the memo. Nunes' memo shows the FBI used information from the Steele dossier to obtain FISA warrants to surveille Carter Page. Maybe there's a bit of a surprise, and someone else from the campaign was watched too.

Maybe there will be some innuendo that information was shared with the Clinton campaign. You know, hints that it was possible, but no definite evidence that such illegal information sharing actually happened.

It will leave out the information that Papadoupolous told a Danish Australian somebody that he was getting dirt on Clinton from the Russians. That this info was given to the FBI, and they obtained warrants based on that, and maybe other sources too. How this leads to a warrant to watch Carter Page--that I don't know right now. That interesting piece of the puzzle will probably be revealed sometime.

The memo probably pretends that there wasn't anything to worry about the Russians and the Trump campaign until all that misleading info from the Steele dossier, and that was the excuse to spy on the Trump campaign.


True and Not True

However, parts of the Steele dossier have been verified as true, parts have been shown to be wrong, and parts are very scandalous and the kind of delicious misinformation that some source enjoyed feeding to a gullible mark.

Too many Trump supporters would love to pretend that there is nothing to see in Trump's closeness to the Russians. There was no Russian misbehavior. Instead, the misbehavior was on the part of the Obama administration and its subverted spy network embedded in the FBI and DOJ.

What a cynical ploy this is. The Dems on the committee want to blow the whole issue open with their own version of the events. But somehow it's OK for the GOPers to publish their case, but not for the Dems to do the same. I wonder why? This is so obviously partisan that no one should see it any other way.

If and when Nunes' memo is published, there will be hew and cry, and hundreds of journalists will be working to dig out as much of the rest of the story as possible. We \probably won't have to wait very long to find out all the mitigating information that the Dems wanted to tell but weren't allowed to.

High-ranking officials in both the DOJ and FBI don't want the memo released either:


“We have grave concerns about the material omissions of fact that fundamentally impact the memo’s accuracy,” the FBI said.

Are Trump and Nunes hoping the hew and cry will be enough to shut down the Mueller investigation? Maybe that's what they hope, but I doubt it will happen. I doubt there is much that will smudge the investigation. Mueller will continue to work meticulously gathering the information that's out there, and maybe parts that are currently hidden--though I don't think there will be any more major revelations. I'm so looking forward to the detailed reports--reports are full of real evidence, honestly collected and presented without partisan spin.

What if the memo contains much more than I thought? Then I was wrong and will need to reevaluate. However, if it contains what I've outlined here, this memo is perhaps the biggest example of a shiny object so far in this presidency. A nothing-new-here that dominated the news cycle for several weeks, and that was called "shocking" and "far worse than Watergate." Yep, that's what I'm predicting: a bunch of GOP hype-tripe pretending to be shock and awe. 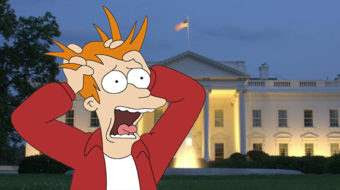 Extras. Is it a coincidence the Trey Gowdy is calling it quits? Gowdy may be an intense conservative, but he seems to have limits on stupid partisanship.

The head of the CIA, a conservative appointed by Trump, says that he's expecting more interference by Russians in the midterm elections. Fake news, I guess.
Posted by ModeratePoli at 8:34 PM