I've thought about guns all my adult intellectual life, which actually started at age 12-13. I've observed the American cultural traits and myths about guns. First, I have to say that guns are pervasive in American culture. Not as pervasive as food or cars or television, which are practically universal. But about as common as: voting, home ownership, and exercising regularly.

Our latest example of toxic American gun culture was a school shooting with 17 people killed. This is no surprise in the US. We have so many mass shootings, though the death toll isn't usually that high.

Gun rights advocates come up with so many excuses. It's never the goddamn huge availability of guns. It's never the worship of guns to blame. It's always mental illness, or a tenuous connection to the Democratic party, or bad parenting, or liberalism to blame.

I'm not having any of it. The gun rights advocates own these shootings. They are the ones who fight EVERY SINGLE REFORM.  They fight any improvement to background checking (NICS), until there's another mass shooting. They don't try to improve reporting. They don't want the system checked, its flaws revealed. They need the background check as a scapegoat. Many of them don't even support the background check, but feel it was imposed on them. That leads me to wonder if they want totally open sales with no limits on who can buy guns.

Maybe some do. Maybe they think it's a constitutional right, like free speech and freedom of religion. However, my freedom of religion doesn't give me the capability of killing even one person, much less riddling scores of people with bullets. Possibly that's a defect in our Bill of Rights--that gun ownership can't be restricted. Or perhaps I should say that 5 Supreme Court justices decided that's what the 2nd amendment meant.

My god, more people may worship guns than attend church. That's how pervasive the gun culture is in the US.

Please note, though, that I don't think every gun advocate is part of the toxic gun culture. Many support reasonable reforms. Even more would support reforms if enough Democrats made clearly that they respect the right of sensible, responsible citizens to own guns. However, they aren't loud enough in their support of reasonable reform. Too often, their primary concern is not losing their gun rights, not safety.

Then there are the full-fledged nutcases. They resist all restrictions. They don't even trust restrictions due to mental issues. They would rather mentally ill people have full access than risk being labelled as unable to purchase due to mental impairment.

Frankly, my opinion is that our standards for mental impairment are seriously too tight. Many more people need to be disqualified due to mental impairment. We need to have a procedure for health professionals to report dangerous people, have their gun rights curtailed, and have procedures to follow up. We need the same for family members to report someone who is dangerous, and have their rights curtailed. Most of all, we need to encourage families and all parts of society to support this--to agree that safety is more important. To say "yes, we are committed to preventing dangerous people from having and using guns." I want that to be a whole-society commitment. That is the only rational basis for a healthy gun culture instead of the current toxic culture. 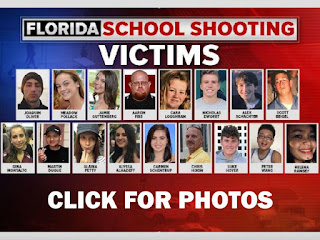 Extras. An example of a gun advocate who blames anything and anyone but except the proximate cause. A conservative supports the kind of measure I talk about. It even has a name - Gun Violence Restraining Order, or GVRO. However, he writes as though these orders are common, but they aren't.

The FBI is accused of mishandling warnings about the shooter. I wonder how deluged the FBI with warnings, and whether the number far outweighed their ability to check. The right wing and alt-right have so many liars who keep them well-supplied with fake stories.

Update 4/7/18. Here's one of the fake stories. The most visible, talkative survivors are actually actors, according to lying stories floating around on the right. And many who repeat those stories don't give a damn that they're spouting lies.

Posted by ModeratePoli at 10:30 PM

I like this post, MP, but I have a problem with a couple of your conclusions. Such as:

"Even more would support reforms if enough Democrats made clearly that they respect the right of sensible, responsible citizens to own guns."

Here's the issue I have. Today's "sensible, responsible citizen" could very well be tomorrow's mass shooter, or just someone who will kill his/her family (more likely 'his') or co-workers when things go bad. Who can tell the future? The weapon turns a regular dispute into a lethal one.

"Frankly, my opinion is that our standards for mental impairment are seriously too tight."

This proves my point. "Mental impairment" is a matter of degree and opinion. What you are saying is that we can try to evaluate the judgment of the person who wants a lethal weapon, which is fair, but perhaps we should question the judgment of ANYONE that wants to buy a weapon. Given the statistics on it, they are either risking self-destruction or harm to people close to them, on the off off off chance that they might have to defend themselves or their property with deadly force. So I'd conclude that wanting a gun (except in special situations) is itself a sign of mental impairment sufficient to deny its use.

I'm of course more than pleased to accept exemptions. Gun 'collectors' are welcome to do so, but they have to license every firearm and agree not to stockpile ammunition. You can even buy a full automatic weapon, but you have to keep it at a registered gun range. All weapons kept in a home must be produced re-registered every six months for a reasonable fee, and if not produced result in severe penalties.

Hunting rifles and such have few restrictions since they have a legitimate alternate use and are not as lethal killing weapons for a potential assailant. But they should also be registered every couple of years.

The basic formula is that the more lethal the weapon, the tighter the regulations. That would make sense even if the 2nd Amendment didn't include the phrase "well-regulated". But since it does, that's more than enough LEGAL justification for my right to use the law to defend myself from these weapons.