Attack on media? Not quite...

I've shown my bias in the title, but why hold back? An antifa group attacked a supposed journalist in Portland, Oregon, the site of frequent clashes between antifa and white nationalist groups. They fight there so often that it's the place to go with you want a street fight, which is one reason it keeps happening. Fight Central will draw the fighters.

Ted Cruz, that paragon of integrity, called for an investigation. It's odd that cells of antifa has been protesting all over the country and there's finally an incident that conservatives can seize on. However, not many are, and I wonder whether they know that it's not going to be a good narrative for them.

When watching the video, you can see Ngo (the supposed journalist) alone within a group of antifa. A couple milkshakes are thrown at him, silly string sprayed on him, a few punches thrown, and lots of yelling. He walks away. Walks, not limps... Those antifa protesters are so incompetent that they can't even beat the shit out of him. It might a pitiful contrast to the video of white nationalists beating a black man in Charlottesville. Though maybe we should be grateful that both victims walked away, and assailants didn't do as much harm as they might have. (Actually, no, we shouldn't be grateful. These assaults were wrong, and we aren't 'lucky' they weren't worse.)

However, the journalist (Andy Ngo) has been working on provoking the antifa group for months. His coverage is slanted, and according to reports he taunts the protesters to provoke a reaction. So he finally got something physical? Oh, SHAME!!!

Portland definitely seems to have a problem stopping all these protests, riots, and fights. Maybe at some point I'll read something that points to why the violence has gotten so entrenched there while other cities have been able to avoid that. Until then, I'm not swallowing the conservative narrative the antifa is the huge danger they pretend it is. People engaging in street fights - yes, but a serious danger to the country, NO. 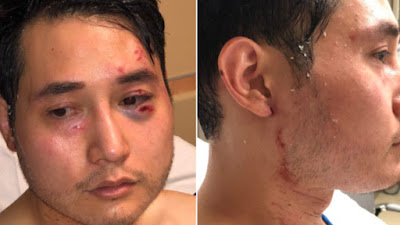 
Extras. More on Portland. Are the Portland police cushy with the right-wing groups? Maybe. Ngo's journal doesn't have the highest ethics either. No surprise to someone like me who watches the media.

Update 8/18/19. Portland was again the site for major protest, led by the Proud Boys and aimed at the mayor and his coddling of antifa. The specific complaint was that there were no arrests yet in the Ngo beating. A leader of another alt-right group surrendered for arrest the day before the protest. The charges stem from a group of alt-right folks descending on a bar after hearing a tip that some antifa folks were there. A large fight ensued, during which a woman was beaten and her vertebrae broken.