This article, though moderately long, is definitely worth reading. It focuses on Roberts' dissent to the same-sex marriage decision. But it also illuminates certain constitutional arguments in a way that makes them accessible to those people (like me) who glaze over from most discussions of 'due process rights' and other legal terms. If you find the term 'activists judges' poorly defined, you'll have a better idea of what it could actually mean in the context of legal thought.

The article also talks about assumed 'fundamental rights' like the right to marry. It ends with a chilling warning about a constitutional philosophy that would send us back to the 1800s and void many laws and regulations, including child labor laws. It's not at all likely to happen, but it's good for a tantalizing what-if scenario to get your blood moving. Sort of like a roller-coaster for the old, decrepit, and intellectual. That describes me and probably everyone on the Supreme Court. Sigh. 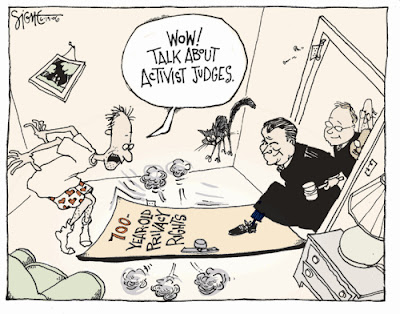 You assumed it was a right, but you're not a justice.
Image: flickr.com
Posted by ModeratePoli at 11:46 PM

After reading both the dissent and the article, I find that, from a safe distance, the reasoning looks circular with respect to assertions about substantive due process. Definitions are subject to a lot of lawyer spin to try to prove this or that point, and Roberts is using it as a rationalization to continue to deny people equal protection under the law.

Kennedy didn't need to find that marriage was a fundamental right as part of his argument to find that laws that restricted same-sex couples from receiving state recognition of their unions was unconstitutional. At most, finding that a marriage being a fundamental right was the basis for applying strict scrutiny to a law that clearly abridged that fundamental right. But Kennedy and the majority (and even the dissents) presented no argument in favor of maintaining the law that would pass ANY level of scrutiny. The best opponents to same-sex marriage could do is to claim that the state has the power to define "marriage" and the SCOTUS doesn't have the authority to overrule the states.

Kennedy just effectively turns that argument on itself. He argues that the states DON'T have the power to define marriage and enshrine that definition into law if that definition results in unequal protection.

A nice example would be if a state had a law that, in order for a marriage union to gain state recognition and special privileges, the parties had to submit to some kind of fitness evaluation in the courts or administrative law process. If, in that process, every same-sex couple that entered it was denied, despite that formalities of a hearing, one could argue that the law which required the evaluation denied them substantive due process.

This isn't simply a silly hypothetical. Married parties do receive advantages in adoption in many states. For a same-sex couple to claim to be married -- even if they had a ceremony and signed relevant papers -- when the state ONLY acknowledged those marriages that it licensed in order to count in the adoption evaluation, denies them substantive due process.

Hence, I'd say that a claim of denial of substantive due process is valid when the procedures followed under the law are a sham, designed to produce a certain outcome desired by that process's designers while giving the appearance of "due process of law".

That's where the marriage license comes into the analysis. For a state to recognize a marriage, the state requires that it issue a license. They set up rules under which they will issue that license, which have nothing valid to do with reasons they require that license for state recognition. Then they deny issuance of those licenses that don't fit those rules.

Kennedy, correctly, says the rules restricting the genders of those seeking the license are a sham. Nothing any of the dissents offer contradict that finding.