The fall of the Confederate flag

I wish I could say that this was a victory for civility, but it's not. People like Nikki Haley, Rand Paul, and Mitch McConnell aren't dropping their support for the confederate flag because they suddenly realized its unfriendly overtones, or because they suddenly decided it's wrong to offend large numbers of people.

No, it was a cost analysis. It finally cost them too much in terms of general respect to continue supporting the flag or being non-committal about it. But I wonder how they made that calculation. Are there snap polling firms that will alert a politician to such changes in the political winds? Maybe there are. Some firms probably track hashtags, and the pol's PR czar will be watching anxiously. One large polling firm, Public Policy Polling had a poll, but the report didn't break down lack of support by state, so it's hard to tell whether there was useful information there.

Maybe anxious PR czars tracked the number of clicks on stories about the confederate flag flying high over the South Carolina capitol grounds, protected from lowering unless a supermajority of legislators saw fit to debate and vote on it. I certainly clicked on that story. I read the history of the flag in South Carolina, and how pols grumpily moved it off the State House because of a boycott.


What it really symbolized

I also checked the history of the flags' use, and how it was adopted in wake of the civil rights movement. It was a fuck-you to the federal government and to northerners and to blacks and to those who supported the principle that all men are created equal, not just all white men. Fuck all those people! Give them a big middle finger by flying an old confederate battle flag, one that is clearly different from the stars-and-stripes.

So its modern popularity started as a banner for segregationists/racists. Since then it has become many more things, including a fuck-you to all authority figures (a rebel banner), a southern pride symbol, a fuck-you to diversity and political correctness advocates, a redneck pride symbol, and so on.


Hung out to dry

Last week was a very bad week for the confederate flag. First the Supreme Court decided that Texas didn't have to issue vanity license plates with the symbol on them. Then a racist shot nine black people in a church in a southern state that still proudly flies the fuck-you-I-support-segregation flag. That's a PR disaster, I guess.

Still, I'm surprised at how quickly it turned. Has it really become unsafe or unpopular to be a crypto, under-the-radar, soft racist? Can they no longer hide behind southern tradition?

Yes, that's a big surprise. Yet it really seems to have turned. Already Walmart and Ebay have stopped selling goods with the symbol. That is lightning fast--faster than I ever would have expected. I'm astounded, and I hope someday to understand how and why it happened now.

One final thought. I wrote above that I don't think civility has broken out across the country or the South. I'm afraid it's a matter of giving up an outward symbol without changing any actions or any sentiments.

To quote Nathan Gunn, speaker of the House in Mississippi: "As a Christian, I believe our state’s flag has become a point of offense that needs to be removed." Translation: We got away with this hate for a long time, but the party's over. 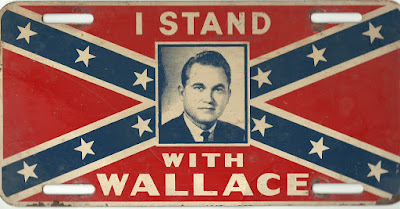 Extras. An explanation of the societal and business trends against the confederate flag. HotAir: It's the Dems' fault for "happily tolerating" the flag for years. Is it because social liberals have reached parity with social conservatives? Uh oh--more flags to change. Complete text of the racist shooter's manifesto.

Update 6/24/15. Here's an interesting report. Maybe the PR czars were following what business leaders were tweeting. Possible boycott was definitely in the air. And does Romney deserve kudos for being the first top GOP figure to call for the removal of the confederate flag? Looks that way to me.

Posted by ModeratePoli at 10:51 PM

I agree completely with you, MP, that their motives for the apparently abrupt change of heart (I agree in appearance only) on the Confederate symbol for defiance is calculated rather than real.

As to why the support for the change is so abrupt since it seems out of proportion to their direct culpability in the Dylann Roof executions of black people, I can only speculate that this was one of the rare occasions when most people could draw the straight line of inferences from Roof's stated motives and those who passively encouraged the attitude if not the actions. That's a very uncomfortable position for politicians in polite society. What they are telling their supporters in private who admire the Confederate symbols and attitude could be something else. A nudge is good as a wink to a blind bat.

What we don't see is them turning from the political efforts of their own that attempt to perpetuate and codify the attitude. Their intrinsic message is: "Don't bother killing blacks. They aren't actually taking over the country (except for Obama) and we're doing what we can to marginalize them and insure they get as little as possible whenever and wherever we are in charge."

In this way, they continue to perpetuate the attitude, keep those who share it (whether the politicians actually do or not) satisfied, but do so in a way that's easier to PR and provide plausible deniability. Push voter ID. (We all know who that should keep from voting.) Rail against non-existent voter fraud. (Implying it's the others who are doing it.) Cut government benefits that help minorities (to keep them in their place). Gerrymander district to reduce "their" voice and provide token spokespeople but allow us to claim majority rule.

These are the methods the current GOP uses to express their disgust with the majority in this country who believe in equal opportunity and that the Constitution to everyone in every state.