Why the flag fell so fast


"Already Walmart and Ebay have stopped selling goods with the symbol. That is lightning fast--faster than I ever would have expected. I'm astounded, and I hope someday to understand how and why it happened now."

Now I have an inkling of why it happened so fast.

The speed indicated that there wasn't a lot of thought or planning required on the part of Walmart, Ebay, etc. Most likely, they already had plans to remove the Confederate flag, and all they had to do was press the 'execute' button. But why would a number of corporations have such plans at the ready?

If something like that happened, it's not hard to imagine that some people who weren't fans of Obama would celebrate the assassination. They might fly the American flag during such a celebration. Flying the Confederate battle flag is also predictably likely. Maybe the assassin (if an American) would have taken pictures with Tea Party gear, or KKK gear, or Nazi gear. Not hard to imagine the Confederate flag on his Facebook page, or even a tattoo of the flag on his body.

Now many of these 'guesses' have a very low probability, but perhaps a major company would want to be ready. So when a company decided to be ready for a possible assassination, they would have plan on how to get rid of stock that has racial overtones, such as the Confederate flag.

If those plans are on the shelf, it wouldn't be hard to roll them out after these offensive multiple murders in Charleston. So, maybe that's the explanation for why several retailers dropped their Confederate flag merchandise so quickly. They had plans in place, and just hit the 'execute' button.

Do I have evidence? None other the news reports of how fast the decisions were made. So maybe I'm all wrong 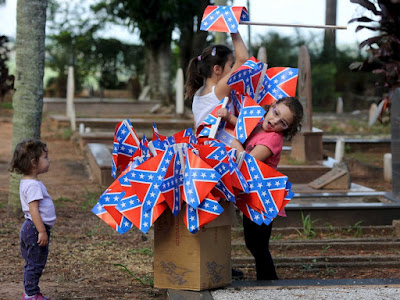 Extra. Nah--just a business decision per this article.

Posted by ModeratePoli at 8:30 PM