Dangerous (a regular commenter) sent me this email:

I knew a little about that particular slogan – which is completely consistent with both Donald Trump’s personal brand and his affinity for the movement which created it – and there’s not a lot there to like, despite it sounding good to a lot of people. This is, of course, why the racist, anti-Semitic demagogues deployed it as an early form of deceptive spin on their intentions...

So I thought this topic in particularly would be right up your alley for research and analysis because it thematically hits on everything you talk about – history, politics, truth, reason. Of course our government should put American interests first, but the problem has always been to accurately determine what those interests are in a complex world, and how exactly to protect or promote those interests without all those nasty unforeseen consequences. Hence it’s easy to question our recent policy decisions in Libya or Syria or Iraq and propose all sorts of un-provable but also impossible to disprove cause and effect (or blame / credit) assertions either.

This process in the hands of a Donald Trump will probably see our interests as matching his personal interests – looking and acting tough and seem to be “winning” – when that will rarely be the case and will likely damage our long-term interests and standing. Similarly, he would never intervene in a humanitarian crisis in, say, central African because what possible interests would it serve to help dark people half way around the world with no payback. In the hands of Hillary Clinton, America’s interests first would mean roughly equal shares of immediate interests and political consequences, long-term interests and doctrine setting, and all of the other chess moves her experienced team would weigh for any action or choice not to act. Bernie would probably err on the opposite side of Trump’s impulsive me-and-now approach, assuming any action would result in awful consequences while not recognizing that action might actually reduce those consequences. For this reason, lots of people she Hillary as a hawk simply because she will consider use of military and/or aggressive diplomatic actions (e.g. economic sanctions) with domestic politics in mind and the recognition that failure to act will be spun as weakness.

Europe and the rest of the U.S.-allied world should pay more for its own defense, but it makes no sense to talk about increasing military spending to be the biggest bad-ass when we already spend more than the next 10 countries combined. Why should they bother? And they do pay in accepting the U.S. dollar as the exchange currency, and giving us all sorts of breaks that aren’t as obvious, but allow us to have gas at half the price of the rest of the developed world. It makes no sense to talk about non-intervention when we would also go around making all sort of demands on both allies and foes which would not be in their interests.

I’ll be interested in reading what you think about this.

So, what I think... Trump always goes for the simplistic slogans, so "America First" fits that pattern. But I actually didn't pay much attention to the discussion of his foreign policy speech on April 27. Now, to answer the question, I'm forced to.

As usual, Trump is short on specifics. One key policy is that he won't let US jobs go overseas. Instead, he'll strengthen the economy here and reduce the trade deficit. But how, exactly? Will he pull the US out of many of the trade agreements, or maybe renegotiate them? He doesn't say.

He'll also get rid of ISIS, and very quickly. He doesn't say how because he's not going to give ISIS that information. If his anti-ISIS plan is anything like his plan for Mideast oil, it's a total incoherent hodge-podge.

He's clearer that he won't destabilize any regimes that are stable. So he won't repeat our policies in Iraq and Libya. Well, I don't think many candidates are going to repeat those policies anyway. But, if he needs to use troops, he will and he'll win... if you believe Trump will miraculously avoid all past and future mistakes that seem to attend most of our Mideast policy. Yeah, sure, Donald will somehow thread that needle.

He'll negotiate a great agreement with Russia or walk away... but exactly what issues are we negotiating over? Oops, he doesn't say.

Trump has some reasonable points about loss of prestige, poor policy decisions, loss of jobs, the importance of military strength, etc. He's not a total liar about those problems. However, it's a big leap of faith to think Trump can change all of that. Unfortunately, we don't get a trial run with presidents, with a redo option when a president turns out to be horrible. I can understand why people want Trump to have a chance to carry out his ideas. But it's a big risk that I wouldn't take on his say-so.

Dangerous, I'm sorry if this didn't focus on his slogan "America First." I think it's more important to try to figure what he would do than analyze if a slogan appeals to certain groups and why. 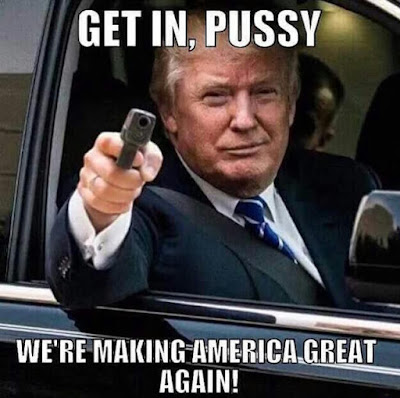 Extras. The NY Times critique of the speech. Snarky comments about the speech.
Posted by ModeratePoli at 7:32 PM

I'm on board with most of what you wrote, except on Libya. We -- the USA -- did not destabilize Libya. Gaddafi was in charge for 40 years and his regime crumbled around him as Libyans rose up to dethrone him. We proved some military support, but our options were never good and Libyans and we are better off with Gaddafi gone than the alternative.

To the argument that the US has lost prestige, that's a widely-held opinion of opponents of the current administration and it's candidate, Hillary, but it's still just an opinion. I'm sure that lots of people around the world have a lower opinion of the US now versus 10 years ago, and many more think more of us. So you can cite evidence for both sides of the argument, but it's a stupid pointless argument because people around the world will always take positions that help their self-interest.

Trade is a good example. They way these countries get into our markets is by offering products at lower prices. Sometimes they are better at making them and sometimes their economies and political system allow slave wages to let powerful people use other people with virtually no restrictions on their health and welfare. I would surmise that Trump is jealous of those countries -- where a large portion of their populations serve at the whim of rich or powerful people like himself -- rather than have to pay them a living wage and comply with OSHA and other regulations. So it's true that taxes and Obamacare and regulations and pesky environmentalists and all of that cost Americans job and stifle American business opportunities. That's simple economics.

But the alternative Trump proposes, like most Republicans, is complete laissez-faire so that American businessmen like him can close out foreign competition while simultaneously reducing restrictions on lower wages and benefits and safeguards for workers. Sure, unemployment will fall to historic levels, but misery will rise for many more Americans and we'll have an even more polarized society. Trump said of America, in an unguarded moment in a debate, "wages are too high". For those paying wages that's true, but most people do not agree.

The point of trade deals has always been to make more customers on both sides of the agreement. It always works in the US and we all gain the benefit in the form of lower prices and a higher standard of living. Over time, poorer countries get wealthier and become customers for our products like airplanes and software and, dare I say, lawyers. But it's a big messy enterprise with no obvious cause and effect, so to put the whole thing under a simple slogan like "America First" is just asking for all sorts of bad decisions from people who would employ such a slogan to get what they want.

Most Americans do not have the patience to study complex situations and make choices from amongst often unclear and uncomfortable options. It's so easy to play to that in politics and it often works for demagogues like Trump. So what would he do if he got in charge? What all demagogues do. Demagogue and scapegoat -- and rely on their own infallibility for all decisions.

Donald Trump would be the worst choice this country could ever make. To put an obvious megalomaniac in the presidency, in times that are okay, would say more about us than any action this country has ever taken.