When you can't get what you want by fair play, we can always resort to other methods. So it was with the State of Texas. The majority of legislators want to ban abortion, but certain Supreme Court decisions stand in their way.

Enter a different idea: cloak your ban in the guise of health-based regulations. Since we're already drowning in regulations, it's a common method of changing practice, so why not? It's not that hard to lie about the real reasons for the regulation, like pretending that abortion is more dangerous than childbirth and causes more death than the low death toll from colonoscopies.

So Texas passed its regulations (after an unsuccessful filibuster by Wendy Davis). Lots of abortion clinics closed down, but at least one sued. The case went up to the Supreme Court, where Anthony Kennedy, typically conservative justice, called bullshit on the regulations. Well, they were bullshit, so I'm glad that he didn't play along. Kennedy has called bullshit on other issues too, including the idea that same sex marriage is dangerous to the institution of marriage and family. 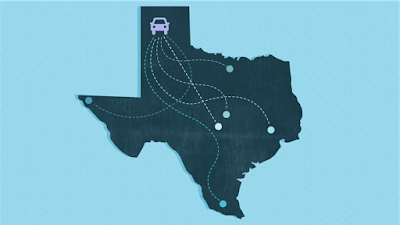 How far you have to travel in Texas
Image: vocativ.com
Posted by ModeratePoli at 4:24 PM