So, here was a great opportunity for a quick check on media bias. Colin Powell's emails were leaked this afternoon. Who is reporting what? I did a quick survey of six sources.


Powell: Trump A 'National Disgrace'; Clinton 'Screws Up' Everything 'With Hubris'


Colin Powell Is Not a Fan of Either Presidential Candidate, Hacked Emails Show


Powell: Trump is 'an international pariah' 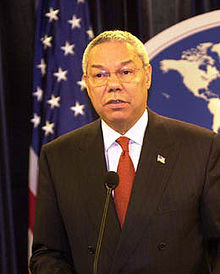 Headlines suck and polls suck. Neither is a representation of the truth and are designed to grab attention.

It's a shame the media does not simply report the facts, providing just enough analysis to explain complicated information or provide context. I can decipher it and ignore the headlines, but so many people don't or can't.

So let's talk about equivalence, fairness and false equivalence. Part of it is the non-biased media not wanting to tell their audience what to think. "Equal" is an easy course for outlets that require the appearance of impartiality and have to fill a lot of space or time. But that's ripe for easy manipulation from political operatives to create false equivalencies. Combined with media needing to maintain the audience with continual loud focus on the story of the day (or hour), each day's developments must naturally be just as important or receive as much attention as yesterday's, no matter the actual importance. And each side's operatives get equal time to make their case, no matter the quality of their argument or the accuracy of their facts.

The best news outlet I know is the local all-news radio station near me, KYW. They report a bunch or generic headlines at the top of each half hour, then report every story without any editorializing, loaded words, or false equivalency. They don't have to make stories more compelling, or give over-the-top analysis to give the audience the key facts. They don't stretch the facts or importance of stories that happen to generate more audience interest, and never give time to partisan or biased talking heads. They can do so because they get high ratings and make good money, are 24/7, and only audio (although they also have a web site).

What each of these stories about Colin Powell should lead with is that he lied to the world to convince much of it to invade Iraq, starting a disastrous conflict. Anything he has to say should not be taken seriously as an expert opinion. His reputation would not survive under cross-examination. That said, he might accidentally or circumstantially speak the truth.

Chris Wallace (FOX news) says it's not his job to discern the truth of responses given to him by a candidate for president when he asks a question to them. WOW!
Matt Lauer seemed to be working on the same policy when he got untrue responses from Trump and Clinton the other night, and never called them on their false responses.
If seeking the truth is not a journalist job, whose job is it?
Walter Cronkite, Edward R. Murrow, Mike Wallace, and other honest journalists must be rolling over in their graves to hear such garbage.
The press has been the wall against the lies of those who seek power, or are in power. That includes private as well as public power movers and shakers.
If you think Trump as president is dangerous for America; a press willing to ignore lies and present false choices to Americans, will surely be the end of freedom and justice in America.
Seems the current policy of journalism is to simply allow people in power, or seeking power to say whatever they want and let the people decide. The people rely on the press to highlight lies, so they can make informed decisions based on true facts.