Cultivation of a fake news story

Supposedly Clinton blamed her loss partially on 'fake news' stories. Conservative commenters scoff at the idea of fake news, though they never try to tease out what might be real news versus fake news. They pretend that fake news is a liberal term for news that conservative media covers but mainstream media doesn't cover.

I know differently because I've researched some fake news, otherwise known as LIES. It's sad that the state of all media is so degraded that no sources are generally reliable for giving the whole view. However, MSM doesn't generally lie, and are called to account when a media source does lie.

Conservative media, on the other hand, frequently deals in lies and fabrications, and no one is called to account. No one in conservative media suffered for the lying, distorted editing of the Shirley Sherrod video, at least from what I've heard.

But this is repetition of a complaint I've made before. The new info is about a clear case of fake news. Alex Jones of Infowars was promoted the idea that the Clintons are involved in child trafficking. Supposedly the evidence is in the form of 'code words' in the Podesta emails. Jones kept promoting this story until a gunman (influenced by the stories) went into a pizza restaurant to investigate Jones' allegations, fired off a few shots (luckily injuring no one), and was arrested.

Of course Jones can't admit that he was wrong. Instead, he said that the restaurant is now the focus as a coverup of the real trafficking operations. He's still absolutely sure that something is going on.

This is such disgusting lying and incitement. Jones takes no responsibility, and he also is uninterested in whether anything he implies is true or not. Evidence that can be discovered, examined, and tracked to further evidence holds no interest for him at all. He's not an investigator, he's a lying, manipulative conman. It's important to watch his video in this story to see how unrepentant he is. He pretends that he hasn't focused on the pizza restaurant, which is a blatant lie when you look at his website, with its claim that "Pizzagate is global" and its picture of the restaurant itself. 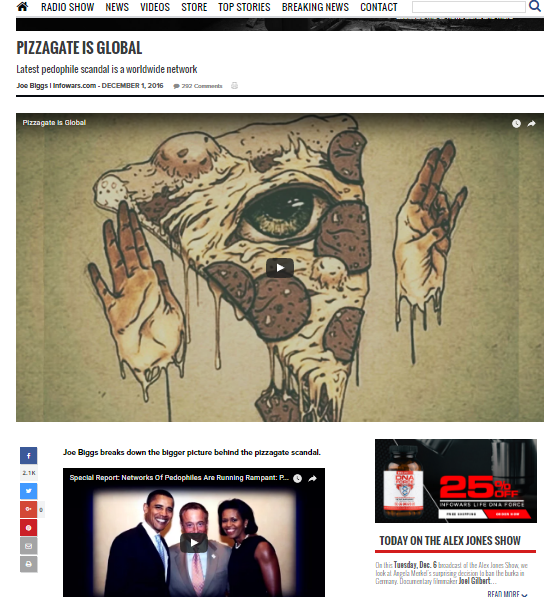 This is the mindset of too many conservative media purveyors, and it becomes the mindset of their listeners. They don't have a clue how to access for truth, for evidence, for possible falsehood in the information they consume. They will make amazingly heinous accusations, like a pizza restaurant sells the opportunity to sexually abuse children. These accusations are based on someone's sense of 'code words' and their interpretation of logos and artwork. Solid evidence isn't necessary--it's fine to broadcast these suspicions because, even though the accusations involve some of the most brutal and repugnant acts, the accused don't deserve a fair hearing. They're just a bunch of libs--not real people. So you (an average real American) shouldn't be accused like that, or your brother, or a preacher, but it's fine to do to those horrible libs.

I suppose that's what it boils down to--it doesn't matter what you say about libs. It can be true, false, scandalous, fictitious, whatever. Just go ahead, because they are horrible and deserve whatever treatment they get. Ugh. There is no honesty, no ethics, and no principles in that way of thinking, but that's where a lot of these conservative are. 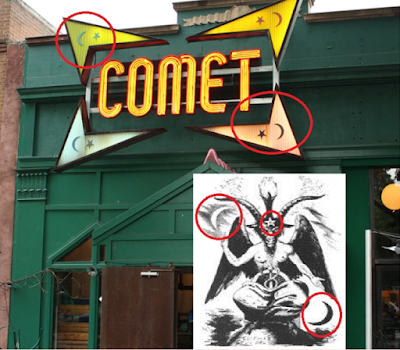 Extras. An interview with Pizzagate gunman. He doesn't sound like a rabidly bad person--religious, concerned. That was lucky, and may account for why no one was hurt. Aide on Trump's transition team is fired for spreading this stuff. Threats to another restaurant due to Pizzagate fake news stories.

Update 12/13/16. More details of the gunman's preparations and what he did in the restaurant.

Posted by ModeratePoli at 3:59 PM

Most Trump / GOP commenters spew fake news again and again on major outlets like CNN. It doesn't take a published story sent out on Facebook or email and copied around the internet for fake news to be disseminated. Trump himself and his mouthpieces, and Mitch McConnell and the rest constantly advance lies and make representations they have absolutely no support for except either wishful thinking, political hatchet jobs, or opinion. But repeated often enough or set as talking points, many become facts in the minds of many people and "fake" facts become more real and harder to dislodge than truth.

This development is probably the most dangerous development from this political cycle and the body politic that led up to it. Facts became inconvenient and the saying used to go that a lie can get half way around the world before the truth gets its shoes on. But today, with sophisticated manipulation, the lie can hide the truth's shoes, pick up even more speed, and make sure the truth never leaves the barn. Further, the lie never seems to have to prove itself to become the truth. And the truth can be turned into the lie with some clever word play and all manner of ad hominem attack on anyone who might advance it.

To post something on your comment, I have to prove I'm not a robot. But to spread a meme, nobody has to prove what they say is true. There's a little imbalance there.