Here is a great article about the current position of the leaders of the Democratic Party. They will be in the wilderness at the federal level, with no veto power unless the GOP allows continued use of the filibuster. I have strong doubts that the filibuster will survive. It might be gone as soon as January 2017.

Dems haven't figured out what their plan will be in response to GOP control of the legislative agenda and their ability to pass and get bills signed. A lot of bills will probably roll through Congress next year, and it's unclear that the Dems will be able to stop any of them.

Maybe, finally, the Dems will start talking about what should be fixed. They may talk about the downside of the current situation, and how it could get even worse with the GOP plan. My feeling is that the Dems were always too confident in the status quo. There was too much happy talk about Obamacare, and not enough concern about its costs and how to rein them in. There was too much happy talk about the job market improving under Dems, with no strong plan of how.

It's true that the GOP stymied the Dems completely. They couldn't have reformed any part of government if they had wanted to. But the Dems still could have shown the ideas and willingness to try. However, they didn't. They wanted the same path, starting at the status quo and adding more Dem-like programs and spending.

It seems like that plan has been a loser, and now the loss is almost as complete as possible. Will the Dems learn? No signs of it yet. 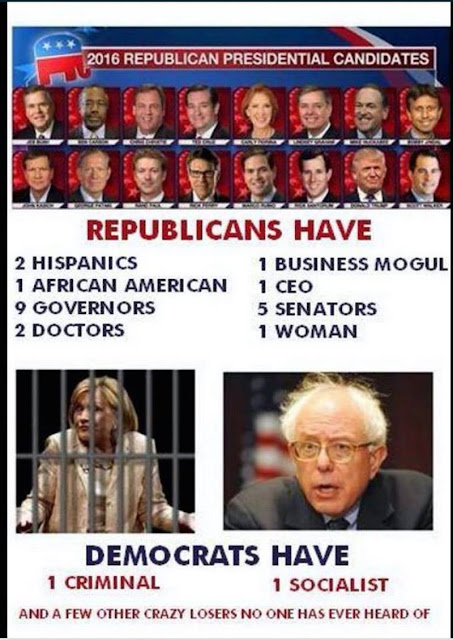 Extra. What Trumps says he'll do in his first 100 days. I should revisit this and make my reality-based guess of what will happen.
Posted by ModeratePoli at 10:25 PM

I would have expected more incisive analysis from you, MP. Obstruction was the reason for nothing getting done, and the focus on the president as lightening rod for disappointment and grievances is so much easier than practically anonymous people in Congress.

$2 gas and under 5% unemployment would have been more than enough for a GOP candidate to run on. And after 2008 and 2012 the GOPs were supposed to focus on self-reflection. Instead, they just double-down on their grievance creation blame-shifting strategy and eked out a win they didn't deserve.

But now they WILL see how the game is played as they have no cover. They will take the blame for everything that goes wrong, and with their program a lot will go wrong and there will be a lot of grievances generated. And when gas goes back to $4 (since that's what Russia wants) and unemployment rises to 7% (since that's what GOP donors want) expect the pendulum to swing back hard.

If I'm leading the Ds, I tell them to sit tight, blame the GOP for everything, obstruct as much as possible highlighting all the negatives their opposition are setting loose, and let nature take its course.

You won't get any argument from me that the Dems were foolishly complacent about their situation. I've been saying that for years. I never imagined the GOP would ever nominate a candidate like Trump, but I always felt that, whoever they did nominate, they had a good chance of gaining the trifecta in 2016 and doing significant damage to Obama's agenda.

But I think your understanding of the politics of fiscal policy has it exactly backwards. By far the most unpopular and controversial aspects of Obamacare have been its cost-saving measures: its tax increases, its Medicare budget reductions (the origin of the "death panels" hoax), and of course the so-called individual mandate. Had the Dems adopted the Bush Medicare D strategy of ignoring the deficit issue altogether, the program would have been a lot more popular.

And now we just elected a candidate who ran promising to jack up defense spending, slash tax rates and leave Medicare and Social Security untouched. (Never mind that he's already reneging on the latter.) There simply isn't a shred of evidence that American voters respond favorably to serious efforts to rein in spending. What they respond favorably to is promising them free ponies. That's been true for at least the past several decades, and it remains true today.

If the election were held today, Hillary would win it in a walk. Seeing how Trump has handled himself would definitely turn people off, particularly with this Russia/Putin stuff. Trump now owns it and everything he does with the Rs is going to backfire. Count on it.