Trump had done a relatively decent job of handling the blowback from his epically stupid accusation that Obama ordered wiretaps on him during the campaign. He hadn't repeated the accusation, his surrogates weren't repeating the accusations. A few, like Kellyanne Conway, were going out on a limb and trying to explain what he might have meant. But generally, Trump and his camp were saying 'Let Congress investigate this and report on it.' Yawn, another long, boring Congressional investigation signifying nothing and concluding nothing. That was a pretty good strategy for containing the issue--letting it dry up and die since it was only words.

That lasted over a week (a long term strategy by the standards of the Trump administration). Then on 3/16/17, Sean Spicer, the press secretary, repeated some fake news (verbatim) from Fox contributor Judge Andrew Napolitano who claimed that three intelligence sources told him that Obama got the British intelligence services to do the dirty work. I suppose that means that no paperwork exists in the US, and no Americans can be called in front of Congress who could admit to it or lie and commit perjury. So this story is now impossible to disprove!

Well, it was always impossible to disprove. Who would be naive enough to believe those liars from the FBI, CIA, NSA, etc. who might swear that Obama didn't order such a thing? No red-blooded American would fall for those weasly denials, that's for sure!

The big question: when will the Trump administration learn not to repeat what they hear on Fox News, Breitbart, etc.? 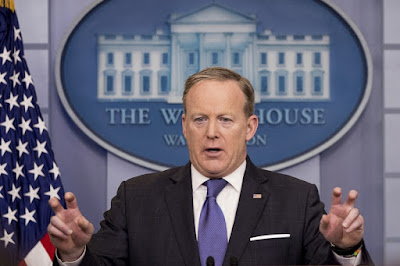 Extras. The top national security adviser General McMaster supposedly apologized to the British privately. Supposedly Sean Spicer did too. And more fun--I found new sources that are hybrids of news and infotainment: news with snark, and news with misleading captions. No, Trump and the British prime minister didn't have a joint news conference this Friday 3/17/17, but on 1/27/17. The bonus here is a longer report from estimable judge and fake news innovator Napolitano.

Belated update 7/6/17. Napolitano at first claimed that his sources talked to Fox News. The anchors on Fox News didn't back him up. Doesn't that look like lying? Napolitano was out for just a few weeks... because Fox doesn't fire people for lying.

Posted by ModeratePoli at 2:28 PM