Trump swallows fake news, barfs it back up. 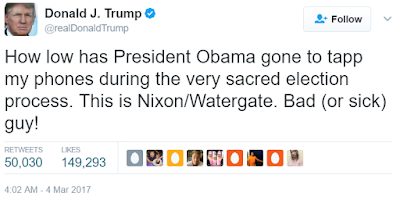 This is what happens when an undiscerning person watches conservative media. The newbie, twit, or whatever term you want to use hears/sees something, and stupidly thinks it's true. Maybe it's reporting that a pizza restaurant in DC is a front for a child sex ring. Maybe it's about a secret planet behind the sun. Maybe it's that Obama ordered wiretaps on Trump during the campaign.

So Trump hears this story from a fake news source that he doesn't realize is fake news. Why doesn't he realize? I don't know. Maybe he's actually incredibly stupid. Maybe he forgot how to question authority decades ago, and had enough money so that he didn't get his ass kicked. Maybe most people are that stupid, and it's just a matter of what propaganda captures them first. Whatever.

So Trump blasts out some tweets about how terrible it is that he was wiretapped. Trump doesn't wait for evidence, an investigation with various findings of facts. No, out it goes on Twitter. Trump has now accused the prior president of extreme malfeasance.

Is Trump going to walk this back? Is he going to explain, like he did with the 'attacks in Sweden,' that he misunderstood, but it still was important and real? Frankly, it's going to be fun seeing how this plays out. Supposedly James Comey, head of the FBI, has already said it's not true, but he has to wait for someone high enough in the Justice Department to approve and receive a statement to that effect.

So where did this fake news come from? Mark Levin. A name I already know because he's blatantly lied before. The guy is such scum.

Now Mark Levin will be partially responsible for millions of people believing until their dying day that Obama tapped Trump during the election. (Only partially responsible because the idiots deserve part of the blame too.) This is going to be birtherism all over again. MARK MY WORDS. Well, I hope not, but it certainly could turn out that way.


Extra. Maybe this is the real story behind the wild exaggerations and lies of Mark Levin. Strange activity by a server in Trump Tower--yes, I had heard of that.

Update 3/6/17. Trey Gowdy, a House Republican, doesn't believe Obama ordered such wiretaps and asks Trump to have the Department of Justice to release evidence of it.
3/7/17. Devin Nunes doesn't believe it either. Allahpundit tries to explain it to HotAir readers, to no avail.
3/14/17. Two more reports on surveillance on and round Trump and his advisers. Nothing that is both big and new, and nothing that corroborates Trump's claims. He hasn't repeated his claims, and is uncharacteristically quiet as he waits for the investigation to drag out and people to stop caring about that particular blather of his.
3/31/17. Fox News seems to be repeating what Devin Nunes claims and labels it as news. So stilted. A never-Trump conservative tries to explain all the threads of the investigation. I find Devin Nunes comical. It's amazing the lengths he's going to in order to shore up Trump's tantrum tweet. This opinion writer agrees.

Posted by ModeratePoli at 9:10 PM